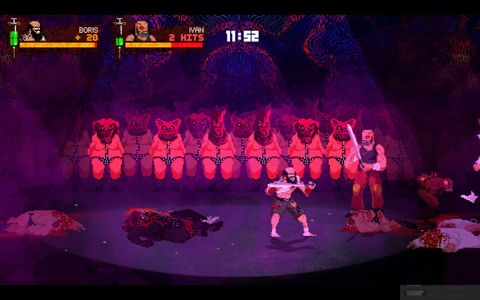 This savage brawler has its moments, but swiftly moves from brutal to boring.

What is it An old-school scrolling brawler with contemporary bloodletting.

It’s now more than two decades since the heyday of the side-scrolling brawler, but that hasn’t dissuaded French developer Le Cartel from attempting an unlikely revival. With its abundance of grit and gore, it’s easy to see why Devolver Digital picked up Mother Russia Bleeds, but rather than showing us all what we’ve been missing, it only succeeds in highlighting exactly why the genre fell from favour.

You play as one of four down-and outs in the Soviet Union of the mid-1980s, eking out a living by competing in organised street brawls. During one fight, a group of riot troops gasses and kidnaps you, before you’re subjected to an unseen laboratory experiment, the side-effects of which manifest throughout in the form of disturbing hallucinations that make your avatar spontaneously vomit. It’s a rare puddle of green amid a river of red, as your revenge mission quickly takes a turn for the extremely bloody.

The corpses left in your wake remain rather than flickering out of existence: one of a handful of contemporary flourishes in a game that otherwise plays things by the brawler handbook. Bringing the pain are Sergei, your classic all-rounder; Natasha, the archetypal weak-but-nimble woman; Ivan, the slow-moving brute; and Boris, who occupies a similar middle ground to Sergei, but trades a bit of speed for some extra power (he also looks like Trevor from GTA V in his wilder moments). They’re armed with a fairly standard moveset, with punches, kicks and grabs that can be modified with the jump button or dodge buttons—combine the latter with a kick, for example, and you’ll pull off a slide attack. Degradable weapons can be prised from enemies or punched free from containers, ranging from knives and bats to one-hit-kill rifles and revolvers. Predictable stuff, but one stage does let you cave in enemy faces with an accordion.

There’s an additional wrinkle in the form of Nekro, a drug upon which the four have become dependent. You can inject this to heal yourself, or take an overdose to temporarily enter a rage mode where your attacks are more powerful, including bone-crunching finishers that make the screen shake and your controller buzz violently as the camera moves in close to frame the kill. If you’re short on Nekro, you can harvest it from convulsing corpses, and if you’re feeling generous, you can even use some of your supply to heal or revive your allies.

Your journey takes you through eight long levels, with the game’s pixel art style effectively capturing the grime and decay of the have-nots’ grotty stomping grounds and the sleazy, corpulent excesses of the haves. They inevitably conclude with boss battles that boast some inventive touches. In one, a combine harvester inexorably advances from the left side of the screen; naturally, you need to keep your distance, but also stay close enough that you can thump the boss into its threshing blades. Later, you’ll lob flashbangs to blind a soldier wearing night-vision goggles, having goaded him into the path of a train that periodically rumbles across the screen.

Though the scoring system incentivises creativity by awarding more points for those who mix up their moves, at times the challenge is so arduous that you’ll resort to cheaper tactics. The low slide is outrageously useful against most kinds of opponent, grounding them to give you plenty of breathing room. Another successful strategy is to repeatedly back off and launch a flying knee to clear some space. The downside is that you’ll often send enemies off the edge of the screen, from where some ranged attackers can hit you without being visible. (Though the same is true even before you’ve sent them flying.)

Even the most treasured of side-scrolling beat-‘em-ups relied on the odd cheap tactic like this, having been designed to relieve you of your credits. Mother Russia Bleeds is at least fairly generous with its checkpoints—though some of them come before story scenes (which can be skipped) and the preamble to boss encounters (which can’t). But given the length of these battles, it doesn’t feel like much of a kindness. The sheer volume of enemies kills the pacing of some of the better set-pieces, from protecting a man in a gimp suit from masked goons at a BDSM club to keeping hold of a walkie-talkie to prevent guards from calling backup.

It helps to share the load, and if you don’t have an available partner, you can call upon the services of an AI bot. Alas, they’re comically inconsistent and tactically inept, throwing grenades at your feet and refusing to heal you even with a full Nekro gauge. During one boss fight I died quite early and watched my CPU partner single-handedly win the fight. On the subsequent stage I had to revive him five times.

Past the halfway point, it descends into grinding tedium, with even weaker opponents taking far too much punishment before they stop getting up. When they’re grounded you can repeatedly pummel them to expedite this, but you’re as well not to bother because you need more time than the game’s prepared to give you—for heavier opponents it might take upwards of 20 successive punches before their light is fully extinguished.

If Mother Russia Bleeds has a message, it’s difficult to know what it’s trying to say. It’s not smart enough to be satirical, with its profanity-strewn dialogue demonstrating all the subtlety and wit of a young kid saying ‘poo’ to shock his parents. The violence is too cartoonish to be properly appalling or transgressive, while lacking the schlocky invention of something like Peter Jackson’s Bad Taste. Maybe the numbing repetition is trying to make a point about how even the most extreme acts of brutality are considered passé in videogames, though that would be crediting it with an intelligence that’s lacking in the rest of the script.

It perhaps says something about our collective desensitisation to interactive violence that a game in which you can uppercut a pimp’s head from his torso and then use it to bludgeon a scrawny drug addict to death isn’t really doing much we haven’t seen before. A depressing thought at the end of this grisly little game.

This savage brawler has its moments, but swiftly moves from brutal to boring.