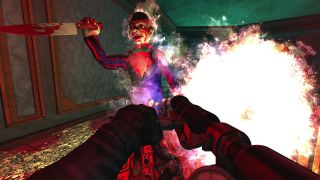 The co-op survival-horror FPS Killing Floor has been around for since 2009, and yet somehow it's still going strong. In fact, it was just this past May that developer Tripwire Interactive revealed that players had fired more than 400 billion bullets over the past half-decade, killing more than 20 billion Zeds in the process. The studio is now hard at work on Killing Floor 2, revealed here this past May, but it's not neglecting the game that started it all: With Halloween just around the corner, the Killing Floor Halloween Horror Double Feature is now live on Steam.

Looking for something to do on Halloween? Check out Club Clandestine, a new map in an underground club packed with everything you need for a hot night out. If demonic possession is more your thing, perhaps you'll enjoy a journey to the Devil's Dollhouse, included in the update as part of the Toy Master Mod. And Zeds! You thought Zed was dead, baby, but they're back, along with all their achievements and unlockable characters.

Best of all, the Halloween Horror Double Feature update is completely free to all owners of Killing Floor. And if you don't happen to be one of them, this is a good time to change your ways: The game is on sale until the end of the month for five bucks, or as part of the Killing Floor Bundle, which includes a ridiculous mess of DLC, for a little under $20. (Steam's new Canadian pricing makes it hard to say precisely what games cost in real money.) And if you can't spare the fiver, you can still leap into the action, at least for a couple days: Killing Floor is part of the Steam Free Weekend that's currently underway.