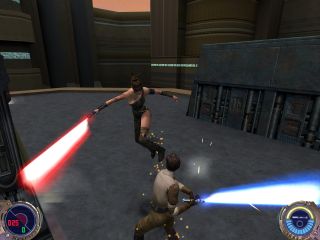 When I was a kid growing up on the mean streets of suburban Colorado you had to watch your back every time you left the house lest you be surprised by an assailant with one of those plastic, retractable lightsabers that got popular around the time the Star Wars Special Editions came out on video. I was raised in the way of the saber, you could say. So when the Jedi Knight series added multiplayer lightsaber dueling servers starting with Jedi Knight 2 I was more than ready to enter the fray.

These flashy fight clubs are memorable to me now not because of the acrobatic stunts I could pull off, the awesome Force powers I could use, or the iconic sound effects of lightsabers igniting, swinging, and clashing. It was the fact that you might have upwards of 30 wannabe Jedi and Sith crammed into the same ancient temple, and we all operated by an unspoken code of honor without ever having to be told. Whether your saber was green, blue, or red, we were all disciples of the duel.

You had to acknowledge your prospective opponent, and they had to acknowledge you back. You never attacked someone who was spectating fights and minding their own business, or anyone who seemed AFK. You never, ever interfered with a duel in progress. There were no game mechanics and usually no player referees enforcing this code, and yet it was treated as sacrosanct. Transgressors were rare, and they were immediately berated and shunned for going against the spirit of the server. If it wasn’t possible to boot them entirely, they would be descended upon by sometimes a dozen humming blades at once as a show of aggressive negotiations to make them go home and rethink their life.

Under the guidance of this code, we clashed sabers, strafed, backflipped, feinted, and Force-pushed in an elegant, kinetic dance where timing, distance, and misdirection were key. It didn’t look exactly like the saber fights from the movies, but it really did make you feel like a badass Jedi when you got into it. Each defeat was crushing and each victory exhilarating. And if you got a little worn out, you could gather with the handful of off-duty masters on the sidelines and watch others go at it, trying to pick up on useful tactics and techniques for your next fight.

This spirit lives on with dueling servers in modern games like Mordhau and Chivalry, but nothing outside of Jedi Knight has managed to recapture the frenetic, acrobatic spectacle of those days spent in a galaxy far, far away. The feeling of avoiding an unexpected saber throw or the sheer glee of winning a match by Force-pushing your opponent off of an impossibly tall sci fi building always put a smile on my face when I think back on them. Within the confines of those servers, it felt for a time that our spirit of good sportsmanship and desire to watch and participate in good fights had truly brought balance to the Force.