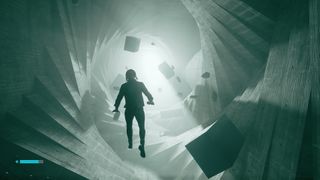 Remedy’s electrifying action-adventure is one of the best single-player games to hit PC this year. Yet despite starring a hero who can fly, damn-near teleport, and crush Hiss bad guys like the puniest of ants with her telekinesis, Control can be seriously punishing.

With no optional difficulty levels, the game can kick your ass in all sorts of agonizing ways during its trickier sections. To ensure Jesse gets through the Oldest House as painlessly as possible, here are some things I really wish I knew before starting Control. With these nuggets at your disposal, you should die much less than I did.

Upgrade Launch before any of the other abilities

As you can read in our Control abilities guide, Jesse’s telekinetic throw is easily the most useful power in the game. It’s the first ability you unlock, and it's essential against the Hiss.

Jesse is initially restricted to just one Personal Mod, so you are only able to improve one ability. As Launch is such a reliable Hiss-slaughtering crutch, make sure you use your first mod slot upgrading it. Any perk that decreases its energy cost will let you use the throw more often, and can prove exceptionally useful during early fights.

Not long after you cleanse the Benicoff TV Object of Power during the 'My Brother’s Keeper' mission, Jesse is confronted with the game’s second boss, Salvador. The former head of security can be utterly awful to fight if you don’t go in with the right abilities equipped.

While using cover to stay out of the way of his projectiles can prove crucial to keeping Faden in the fight, its the Launch Explosives ability that really turns this fight on its head. Use this optional ability to hurl the boss’ pesky projectiles back at him. Not only is this a great way to whittle down Salvador’s health, but having a reliable means of returning his near-one-hit-kill grenades drastically increases Jesse’s chances of making it out of this fight with her spleen intact.

Control has some of the best collectibles of any game this year. The wealth of correspondence and case files you can read helps establish and expand Control’s lore. Most of these documents are brilliantly written and it’s easy to lose yourself in the Oldest House employees' petty squabbling.

Keeping an eye out for files is also important when it comes to picking up some of the game’s optional abilities. The Research & Records doc, in particular, is tied to optional quests that lead to Jesse picking up powers like Seize and Shield. Keep your eyes peeled and your reading glasses on standby: Control’s files prove illuminating and invaluable for Jesse’s telekinetic powers.

Use desks and pillars for cover whenever you can

Though Control doesn’t have a proper cover system, Jesse can still crouch behind the Oldest House’s many desks, sofas, and pillars to protect herself from Hiss bullets. Crouching behind furniture then briefly popping back up to pummel your enemies with your Service Weapon is a much more sensible approach to going in guns blazing.

As Jesse’s health bar can drop quickly, it’s good to not be too aggressive. While it’s tempting to just start wading in with Launch and clips from Grip, going in gung-ho is rarely a good idea. Instead, use the environment to your advantage, take cover when you’re under pressure, and consider assigning a mod that increases the damage Jesse does when her health is low. Be sensible and cautious, and you’ll smack those Hiss down in no time.

Don’t forget to pick up Board Countermeasures

These optional side quests can be picked up from the main Central Executive fast travel point. Completing them nets you a bunch of XP and materials that can be spent buying new weapon and ability mods. Taking on Board Countermeasures is also a good way of familiarizing yourself with the Oldest House, as objectives normally ask you to kill Hiss in specific sections of the huge, dimension-spanning building.

When in doubt, refer back to your map

The Oldest House is a twisting, constantly shifting environment that tries to outfox you at every turn. To reduce the chances of you taking Jesse down the wrong corridor or stumbling into the wrong section, keep referring back to your map.

In a canny move, Remedy lets you control Jesse while looking at the map—as it’s semi-transparent, you can move around your environment while navigating at the same time. For hard-to-reach areas, like when you want to get to Black Rock Processing, the detailed map can be an absolute lifesaver… especially for those of us with a godawful sense of direction. Me, in other words.

Equip Spin with a damage boost mod for ALL the damage

Equipping Spin with a damage-boost mod is a game-changer, though. I found one that increased the gun’s power by 32%. When combined with an ammo efficiency perk, Spin is capable of absolutely rinsing Hiss HP in no time at all.

Turn the brightness up for the finale

During the game’s final mission—aptly named 'Take Control'—Jesse is confronted with a couple of areas that can be seriously tough to navigate. The first of these cavernous, vertically-stacked rooms sees Jesse trying to turn off a McGuffin called the Slide Projector, while the final mission objective returns Jesse to the Astral Plane.

Both areas are seriously dark. Control is already a dimly-lit game, but I found myself plummeting to my death time and again in these sections. Because both areas require you to constantly use Jesse’s Levitate ability to float and climb to higher levels, the fact you can barely see your surroundings while trying to nail precision landings can be a nightmare.

Do yourself a favor and either whack the brightness of your monitor up or crank the in-game brightness slider in the settings menu. Shed a little more light on the situation, literally, and all that levitating action becomes a lot easier.