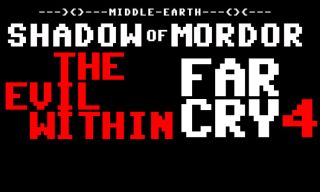 The holiday season is the perfect time for family gatherings, the exchanging of gifts, and of course, visitations from grim specters who want to show you chilling visions of harrowing realities. Let that paper-thin premise take you below, where we'll look at three games from 2014 presented in a disturbing reality where PC graphics had never been invented!

It's the text adventures that never were! OoooooOOOOOooooOO!