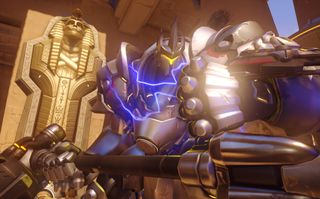 The Overwatch Contenders groups phase saw day one play out for both the North American and European teams last weekend, June 17 to June 18. Considering what these teams accomplished in the late rounds of the qualifiers, the results were a bit mixed. In European group A, juggernaut eUnited struggled to find their footing and ended up finishing second with just one win and two draws. In group C, fan-favorites Ninjas in Pyjamas also achieved mediocrity, going an even 1-1-1 upon conclusion of the first day of groups. Things were about par for the course on the North American side, though many expected FaZe to do better than one loss and two draws in group A. In “Hell Group” D, Hammers was blanked with three losses while Renegades finished a group-best 2-0-1.

Here are a few great plays from some of the matches.

GamersOrigin vs. Ninjas in Pyjamas

Point A on Hollywood gives fits to even the best of teams. Even the slightest misstep ends up snowballing into something awful because of all the positional nuances around the control point. GamersOrigin went for a triple tank attack against Ninjas in Pyjamas on this heated point, getting an early DPS pick that gave them some wiggle room on how far they could extend. Zappis wasn’t having that, though. He blinked into GamersOrigin’s backline in an attempt to bring down Benbest’s Reinhardt. It didn’t go as planned.

Not only does the support staff come to the rescue, but Benbest goes on to land a pivotal Earthshatter that wipes most of Ninjas in Pyjamas. As you can see, Zenyatta and Lucio are more than capable of keeping things under control. Though Reinhardt isn’t as popular as he once was, he still performs very well in the right compositions, and he’s still one of the best at keeping support players alive. By using Earthshatter right there, it kept “baby” D.Va alive and allowed for the rest of his team to close the gap.

(It was just announced that Ninjas in Pyjamas has released their roster. Best of luck to them.)

Regardless of your feelings on organizations using players from outside of their regions, it’s working out for the teams that are doing it. One of the best examples is Cloud9’s Kaiser, a tank player from South Korea who used to play for RunAway. He has fit right in with the aggressive playstyle Cloud9 is known for, often setting the stage with Winston jumps, much like in the following clip:

With some help from Orb of Discord, Kaiser is able to destroy two players from Hammers as soon as he lands, leading to a full teamkill thanks to the cleanup by DPS star Surefour. As we’ve been seeing for quite awhile now, Winston has all but replaced Reinhardt as king of the tanks. Teams have been going for mobility and burst damage as of late, and Winston is a much better fit with those sorts of compositions. His primary fire is also very useful at chasing away pesky Genjis and Tracers who are running rampant right now.

Another thing we see from this play is more emphasis on that Zenyatta-Lucio combo. Discord and speed Crossfade are two of the best tools in the entire game, and if you have a competent team, there’s no reason to rely on the Mercy crutch that’s been plaguing the ladder since her buff. Lastly, Soldier is still proving to be a go-to pick for cleanup and anti-Pharah duty. Surefour is in a league of his own, but you’d be hard pressed to find a teammate who would argue with you insta-locking on Soldier in most situations.

LG Evil is expected to do very well in Contenders. With some fine tuning, I’d go so far as to say they have the potential to be one of the best teams in professional Overwatch for a very long time to come. They play with confidence and don’t deviate a whole lot from characters that they’re comfortable with, making them a very effective roster. Toronto Esports is still proving themselves to the Overwatch world, making a strong case in the qualifiers but struggling so far to keep that momentum going in groups. Their 1-1-1 record has them in second place in their group, but they’re going to have to hit the books hard if they find themselves in the top eight. Their questionable defense on Numbani against LG Evil had many fans quite confused.

For whatever reason, they chose to leave the high ground uncontested, putting them in an immediate disadvantage in their first engagement. Jake had his choice of targets from the ledge while the rest of the team mopped the floor with whatever was left of Toronto Esports’ defense. Needless to say, positioning isn’t an optional, tertiary factor to consider when it comes to Overwatch. Knowing where and when to engage with your team is at the heart of every battle. Defending from the high ground in Numbani is basic, and ignoring it ended up costing Toronto Esports the match.

Overwatch in the coming weeks

With the new Reaper change, it’s going to be interesting to see whether or not teams start ditching Genji or Tracer. Reaper is a known Winston counter, and now that he doesn’t have to worry about orbs, I imagine he’ll be able to stay alive long enough to make teams consider him more often. Of course, he’s not as mobile as the other two, so compositions would have to play around the Reaper pick since he’s not a great compliment to anyone unto himself.

In regards to Overwatch Contenders, we’re done with the qualifiers and day one of groups, meaning day two for each region will be this weekend, June 24 through 25. Once the top eight teams have been decided, they’ll head to the playoffs starting the July 1. With $50,000 USD up for grabs, you can be certain that some of the best Overwatch esports is right around the corner. Visit the official site for more specific information.