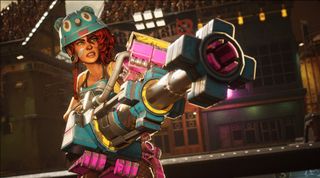 Update: Bleeding Edge now has a live Steam store page, with a release date listed for March 24, 2020, and you can see the official trailer above.

We're expecting to hear more about Bleeding Edge, the hero brawler in development by Ninja Theory, at XO19 tonight and tomorrow, but it appears a store listing for the game has revealed dates for the game's upcoming closed beta and launch ahead of the show.

True Achievements spotted the Microsoft Store listing, which has since been removed. According to their reporting, Bleeding Edge will launch March 24, with two separate closed betas starting February 14 and March 13.

The page also revealed that players who pre-order the game and Game Pass subscribers will have access to the beta phases.

We first saw Bleeding Edge at E3 earlier this year, and our panel had muted reactions to their hands-on time with the game. It doesn't have the close-in, intense melee combat Ninja Theory has made itself known for, and appears to try to bridge the gap between Overwatch and MOBAs.

However, our editors point out that the fact Bleeding Edge will be available on Game Pass will likely add a lot to its appeal.

In any case, we'll find out more about it in the next two days at XO19.