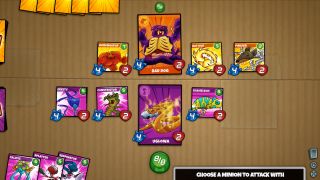 Never are the rules of a videogame laid out as explicitly they are in a card game. The stats and numbers underlying your every move are on display, your deck needs to be balanced, your strengths and weaknesses accounted for, your modifiers and bonus effects ready for stacking.

Cardpocalypse, the '90s-styled card game from Gambrinous (Guild of Dungeoneering) and VersusEvil, understands these rules, but then messes around with them in a way worthy of its mischievous elementary school setting.

On the face of things, Cardpocalypse is an addictive but accessible card game involving Power Pets (think Pokemon with a sci-fi twist) . Each deck is led by a ‘Champion’ card, which starts the battle with 30 health.

You accrue increasing amounts of food each turn, which you then use to play minion and mutation cards from your 20-strong deck. Minions are expendable Pets capable of dishing out and absorbing damage, while mutations give various power-ups to your champion and minions.

Get the enemy champion’s health down to 0, and you win the match.

There are dozens of Power Pets to collect, and they’re split into four distinct factions: the canine Woofians, the feline Meowtants, the reptilian Sinnisers, and the murine (that’s mouselike, for you adjective novices) Pipsqweaks. Each faction has its own playstyle, and your decks will be made up of neutral cards that can be used across factions as well as faction-specific cards.

As with any card game, Cardpocalypse encourages deck experimentation, but it goes a step further with a whole new meta-layer of mechanics. This isn’t just a game of card battles, it’s a game of serious customisation.

You can, for example, create your own minions from scratch using special blank cards. These let you smash together different body parts, apply different bonuses, then scrawl your creation onto a card (in a charmingly scrappy hand-drawn style).

Next, you can collect stickers for your minion cards, increasing their health and attack stats. Stickers can also grant extra abilities like Defender, which protects your champion from being attacked, and Lethal, which instantly destroys any enemy card it comes into contact with. Just remember that you can only add one of each type of sticker - health, attack, food, rename, faction and keyword - to a card, so you need to be tactical and selective about how you apply them.

That’s not all. In the twist that quite literally tears up the rulebook and defiles all that is sacrosanct in card games, Cardpocalypse lets you rip cards in half, combining different triggers with different effects to create insanely powerful new mutation cards.

Where in any other card game this kind of madness would break the game (and cause grown men and women to bawl over their shredded cards), in Cardpocalypse it’s all part of the game.

Beyond the tense, tactical action of the card battles, Cardpocalypse also has a brilliant story mode [link to other Cardpocalypse advertorial], casting you as a new girl at school who has the double-jeopardy of fitting in and helping fight off an impending apocalypse using the power of cards.

In a genre defined by rigid rules, Cardpocalypse stands out by making rule-breaking the entire point!

So go out and fend off the Cardpocalypse by picking the game up in the Epic Store (a Steam release is due in 2020).