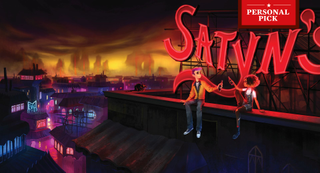 My best friends and I have always said to one another, "We'll take turns driving the hippie bus to Hell." We've laughed at a lot of inappropriate things. Gotten ourselves into questionable scenarios. Done a lot of stuff our parents still don't know about, and thank goodness there is no evidence of it. (Don't ask, mom.) We joke about going to Hell, but Hell is just a big joke until you're actually there. Then it's an afterparty.

That's the whole premise of the appropriately-named Afterparty. You play as best-friend-duo Lola and Milo who have, due to unknown circumstances, died and gone to Satan's playhouse. To return to the land of the living so they can resume their lives, you must out-drink Satan who—surprise—is an alcoholic. Pretty easy, right? Not so much. Afterparty sends you on a seemingly impossible mission, forcing you to question everything about Lola and Milo's friendship while simultaneously questioning your own moral code.

Hell has its own social media network, too, and everyone, demon or recently deceased, is constantly offering their hot takes on what's happening around you. Twitter-style pop-up boxes will appear when you walk by or near someone on their phone. Sometimes they're talking about you. Sometimes it's not nice. Okay, well, most of the time it's not nice.

Afterparty has the same superb voice acting and dialogue that made Oxenfree stand out from a massive pack of indie games. The punchlines are deliciously morbid and perfectly suited for dark senses of humor. The dialogue system, speech bubbles and all, is still timing-based and has the same visual style, but with two important differences.

Based on what kind of cocktail you choose to consume at any given time, you'll temporarily unlock new dialogue options that can help or hinder you depending on the social interaction. Drink a Bluebeard’s Last Wife, and you'll have the option to talk like a pirate. Drink a Tommy Gun and you'll talk like an Italian mobster. Drink a Global Extinction and, well, I'll let you find out what that one does. These special interactions add more unpredictability to the outcome of what you choose to say—just like real life. You may have enough liquid courage to challenge a demon to a fight, but that doesn't mean you'll have it in you to go all nine rounds, or even one.

The other major difference is that this time around you make decisions for both Lola and Milo instead of just one character. You, like the personal demon that follows those two college kids around Hell, are the puppet master. Your responses can make or break their friendship. It's like watching a reality TV show, only without FCC regulations. You're faced with moral choices that can either push or pull them apart—and your personal demon will always be around to make you second-guess your decisions, your beliefs. It unexpectedly creeps up on you, when you're in no mood to take a trip down philosophy lane.

Afterparty has a subtle, smart take on the meaning of friendship—what it means to comes to terms with letting your best friend grow as an individual without you. The game also cleverly plays with the idea of what makes a person truly evil. From little slights against social decency like not putting the shopping cart back in the carousel to straight-up murder, Afterparty has commentary about all types of moral abominations.

Ultimately, you get the chance to escape Hell, but it comes at a cost: It's not a question of if you can get out of Hell without being an asshole, but how much of an asshole are you willing to be to get out of Hell.