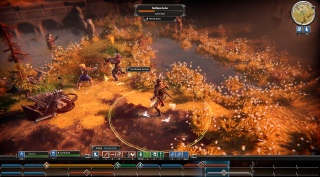 My mage and rogue creep through a patch of tall wheat fields before stumbling into a gigantic steampunk soldier, who brutally cuts my team down in a hail of machine gun fire. Instead of grunting through a Game Over screen or reloading a save, I enter Trance Mode and slide back in time several seconds, just before my terrible blunder.

I take a slightly different path, only to barrel into a group of Northland soldiers who toss a grenade into the wheat field, setting my world on fire. This time when I enter Trance Mode I quickly move my party outside the fields, the grenade still sailing through the air. Back in real-time the enemy chases after me. I carefully time my retreat to bait them into the wheat fields at the exact right moment, catching them in a literal grenade blast of friendly fire.

"It’s like Save Scumming: The Game," says Antti Kemppainen, game designer for Iron Danger. The tactical RPG, from Finnish developer Action Squad Studios, is built around a unique form of quick-loading that's more interactive than mashing F9, thanks to a little time magic. It's like editing a video of your game while you're playing it.

The fantasy steampunk world of Iron Danger is partially based on Finnish folklore and the story of Kalevala, with a dash of giant mechs and bear tanks. As the story begins, young villager Kipuna flees an invasion by the industrialized Northland army, only to fall into an underground chamber and impale herself on a glowing shard. Lucky for her, she becomes imbued with a shard of time magic, allowing her to avoid death by winding back several seconds. I can hit a button to enter Trance Mode, pausing the action and bringing up a mini timeline on the bottom of the screen. From there I can easily scrub backwards—just like video editing—and watch the action reverse, then queue up different moves and attacks as I experiment with the optimal strategy. My enemies are always fixated on my real-time positioning, letting me dodge attacks, set up traps, synergize my skills, or back away and try something else. It's sort of like bullet time for a strategy game.

"I love turn-based games. They give you lots of time to think about what you want to do and explore your surroundings and tactics," says Antti Kemppainen. "But there’s also a lot of waiting around. We wanted to take turn-based gameplay and provide more active situations so you’re in the middle of this cool battle. We came up with this idea of being able to rewind time whenever you want. You need to use it to outsmart enemies, bait them into traps, and use the environment."

Limited time travel during real-time tactical combat is a difficult concept to wrap my head around, but the video-editing UI is fun and easy to grasp. "The core loop is heavily inspired by the animation tools I used while working on various TV series," says Jussi Kemppainen, game director. "So the game is totally influenced by our background in animation. In a way, Iron Danger has flavors of an animation tool at its core, but gamified and made accessible and fun."

Every skill or attack I select in Trance Mode, like blocking with a weapon or shooting off a fireball, is added to the timeline, displaying exactly how long they take to execute. By swapping between my two characters I can easily combine abilities and attacks, like enchanting my blacksmith Topi’s warhammer with fire before he unleashes a powerful blow.

Action Squad experimented with how much time-travel to allow during Trance Mode. "Go back too far and it adds too much complexity for the player and for the AI," says Antti. Five seconds ended up being the sweet spot. The timeline is broken up into individual action points, called heartbeats, which represent about half a second in real-time. Each skill takes a certain number of heartbeats to wind up and execute, followed by a cooldown. With time as my primary tool, it makes sense that my only limitation is time itself.

Where many tactical RPGs make room for a four, five, or even a six-person party, I was disappointed to learn the max party size in Iron Danger was only two. Kipuna gains several allies throughout the linear campaign, including Topi and stealthy rogue Lemichen, but only one can accompany her in each mission. "We played around with more party members but it disrupted the gameflow. It was too chaotic and too much to manage," says Antti.

Almost immediately I find two separate timelines more than enough to handle, especially with how deadly combat plays out. Even the lowliest enemy can easily drain a third of my hit points in a single blow, and if a character falls in battle, I can no longer progress in the timeline, though consumable healing items can be found in each level with a little exploration. Combat is a careful dance of blocks, dodges, and well-timed strikes, as well as properly manipulating the environment.

Nearly every combat situation I come across in the preview build has some interesting environmental hazards that I can use to my advantage, like spike wall-traps, falling log piles, and suspended weights. In a dungeon level I see a room full of rat-like creatures called Keyu. I can use Kipuna’s lure skill to bunch them up, then hit a nearby lever with Topi to send a conveniently placed crushing trap crashing down on them.

Alternatively an oil barrel I picked up earlier can be thrown, then lit on fire with Kipuna’s trusty fireball spell to create a fiery explosion, bringing back fond memories of Divinity: Original Sin 2’s elemental synergies. "You reach a point where you realize it’s a puzzle game. It’s about staying alive long enough to defeat the enemy," says Antti. My first boss battle, a gargantuan, angry chicken, destroys me time and again until I bait it into charging through another crushing trap, this time filled with fuel cans and oil barrels, along with a well-timed fireball.

Thankfully most of the fights, and the missions themselves, don’t last very long, at least in the early levels. The campaign is divided into a linear series of missions in new locations. In between missions I can select additional skills and upgrades. Action Squad wanted to keep the levels fast-paced, with completion times around 30 minutes each. "We focused on keeping the length a bit shorter, making sure the game constantly feels fresh," says Heikki-Pekka Noronen, lead programmer. "We’re aiming for something more linear and story-focused rather than a huge, open world with lots of grinding."

I’ve enjoyed the recent renaissance of tactical RPGs, but Iron Danger manages to feel wholly unique, eschewing traditional RPG fiddliness like equipment management for pure tactical combat. "We wanted to do something that felt creative," says Antti Kemppainen. "We were super glad to be able to do this but it’s also scary to do a game with no benchmark. Nobody else has done anything like this." Iron Danger is due out March 25.