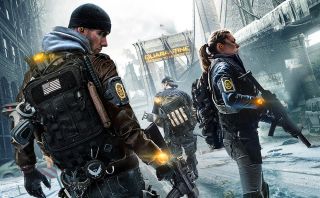 Since my two attempts to play Anthem's demo had me stuck on the dreaded infinite loading screen, I've instead spent the past few days blowing through The Division's campaign. While I expected the early game to be pretty deserted almost three years after release (despite having a respectable audience size on Steam), and to muscle through the main story missions myself—which is possible—I actually found loads of lower level players in the game's safehouses and in matchmaking for activities.

If you've had The Division sat there on uPlay and have wanted to give it a go, this makes it a surprisingly good time to do so.

The reason, I'm guessing, is that The Division is currently one of the Humble Monthly games, along with Yakuza 0 (that's a steal for $12). Presumably, the large volume of subscribers to this service has led to a bunch of people checking out the Tom Clancy game for the first time. It takes about 20 hours to reach level 30 and access The Division's endgame content, and I found players across all level brackets all weekend. Out of the 17 or so main story missions, there were only two occasions where I had to wait about five minutes and try matchmaking for a second time in order to get a party going. That's not bad for a game that's been around for this long.

I'm glad I persevered, too. While soloing The Division is possible—and fine for most of the boring side activities in the open world—it's the magic of synchronising a group's loadouts that brings the game to life. I've had some amazing, dramatic firefights as part of a team this weekend, where a last second heal or deployment of a flamethrower turret ultimately saved the day. I'm now excited about getting stuck into the suite of PvE endgame content with other players. It's a relief there are guides like this to help me along the way.

At this point, if you've ever had a passing interest in playing The Division, you might just want to wait until the second one gets here in mid-March. If you've got 20 hours spare across the next six weeks, though, consider giving it a go, and maybe try to convince a friend to come along. There are plenty more people doing the same.