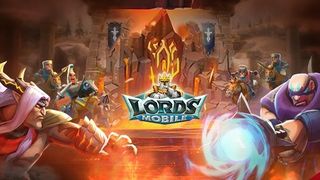 Lords Mobile, one of the top-grossing strategy mobile games, is all about harvesting resources within its fantasy kingdom and using them to steamroll opponents in grand battles. As an open-world RPG meets RTS meets city builder, it’s not short of ways to let you go about the above, either, but the new Dragon Arena update introduces an all-new guild-on guild showdown with huge rewards on the line, and a new hero to be unlocked.

Guilds in Lords Mobile are your way to collaborate with other players. Together you can shave off research and build time, and when you defeat monsters or earn rewards in-game, your fellow guild members do too. It’s a deep bond, in other words, and Dragon Arena takes it to the next level.

When you embark on a Dragon Arena battle, you and one other guild member face off against a pair of opposing guild players in a battle to take over Strongholds.

These Strongholds include Outposts, Transporters, Hot Springs, Ancient Remains, Citadels and more, and holding them generates varying amounts of points depending on their stats. Some of them even bestow special boosts as long as you hold them which might turn the tide of a battle, or deliver the death-blow to your rival guild. All Strongholds must be held for three minutes before they deal out points.

Right in the centre of the arena lies the Dragon Altar. This can’t be occupied, and provides a starting point for caravans. If these caravans reach your occupied Strongholds during battle, get ready for a massive points payout!

When the round ends and the points are totted up, the guild that held the most Strongholds for the longest period and thus amassed the higher points total takes the victory. Both teams get rewards however, so all’s not lost if you come away from the Dragon Arena with a L.

Although the arena battle may be fierce, you won’t lose troops in this mode. All wounded troops, as well as damaged traps and walls, will be repaired in time at no resource cost.

When the rewards are doled out, guild members earn Dragonite, which can be spent to unlock a new hero. Introducing Boommeister Manfred Brandt! Born into a simple life on a farm, Manfred signed up to military service as a youngster to put a bit more food on the table for his family. His talents for combat were apparent right away, and he was thus given his formidable cannon.

Things went south when he was sent to infiltrate the crew of a notorious pirate, however - Manfred and the pirate crew disappeared for years, and when he finally emerged having completed his mission and slain the seafaring criminals, he was unable to prove his identity since the officers who commissioned him were long since killed themselves. Now roaming the lands as a mercenary, he provides high dexterity and strength which can be translated into high physical damage. His cannon burst ultimate knocks enemies back while dealing massive damage, and he’ll prove a crucial ranged damage-deal in any battle.

The new content hype train hasn’t reached its terminus yet though. A new castle skin joins the pile of fresh content this massive new Dragon Arena update brings. Sitting on an ocean of doubloons, the Treasure Galleon boosts your ranged and cavalry ATK and brings some Captain Jack Sparrow swagger to your domain. It’s available to purchase for $29.99.