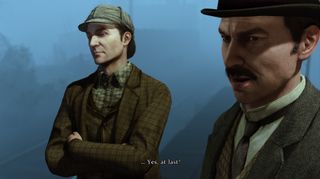 Last month, Frogwares announced that, due to the end of a publishing agreement with Focus Home Interactive, several of its games had been delisted from Steam and other digital shops against its wishes. Fortunately, it's managed to rescue arguably its best game, Sherlock Holmes: Crimes and Punishments.

Ten games were at risk of vanishing because Focus was apparently unwilling to transfer the IDs over to Frogwares, which was necessary for them to take over the store pages. Without them, the developer will need to set up new pages, losing all of the reviews, Wishlists and data.

Focus did not respond to the claims, but allegedly made a change in their policy, which Frogwares was neither aware of nor had encountered before. The new policy meant that Focus would not transfer title IDs to developers once their publishing agreement had come to an end.

Unfortunately, nine of the ten games were delisted, but Crimes and Punishments was saved and remains on Steam. Frogwares has also released it on GOG, where you can net yourself a free copy of Sherlock Holmes and The Hound of The Baskervilles along with it. You can also download a free booklet that shares memories, stories and art from different Sherlock games.

Frogwares CEI Wael Amr said the studio is "forever grateful for the sheer amount of public and industry-side support" that it received. Because some of the games were for the last generation of consoles, they're unlikely to be listed again, and Amr says Frogwares is now fighting an "uphill battle" by trying to get new pages up for the games that can still be submitted.