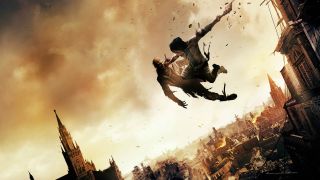 I am an indecisive gamer. Give me a choice between two different rewards and I will tab out to research which one is better. Give me an option between two quest resolutions and I'll scour forums to figure out how each will affect the game. "Do you want to murder this poor, defenseless person for absolutely no reason or reward?" Er, not really, but let me just check a wiki real quick just to make sure.

Based on this fact, Dying Light 2 is either the worst game I could play or the perfect form of immersion therapy.

Let's start at the end of the hands-off E3 demo I saw, because it features exactly the sort of big, impactful choice guaranteed to afflict me with gaming paralysis. The mission of the demo was to restore drinking water to one of the seven districts of The City. The ultimate choice is between working with a local warlord—called the Colonel—on a long term solution, or fighting the Colonel and opening the floodgates of the dam he controls. In the demo, we saw the consequences of immediate gratification.

Protagonist Aiden Caldwell battles the Colonel's soldiers, including one heavily armoured beefcake that Aiden needs to stun with a swinging dropkick before he's vulnerable to attacks. Once dealt with, he rushes to the control room of the Colonel's castle, and activates a switch to open the floodgates. In a cutscene we see the water draining, revealing a previously flooded district. The demo ends with a new type of infected emerging from the soil.

Had we instead decided to work with the Colonel, the damn would have never been opened, and the district would have remained underwater. You could still explore it, diving into the ruins, but it wouldn't have the same importance to your campaign. "If you really uncover it then people start appearing there and you get quests from them," explains Tymon Smektała, lead designer for Dying Light 2. "They uncover something within that district which will need your exploration and investigation. So yes, you could still go there [if it stayed flooded] but it's not really the same as what happens when you really uncover it and it's out of water, when you can really freely explore it."

Such big, map-wide changes aren't the only way your choices will manifest in-game. "There are a handful of big choices, and also there are a plethora of smaller things you decide that make each mission different," says Smektała. I see an example earlier in the demo. Aiden's friend Frank is shot by what he assumes to be the Colonel's soldiers. He's given a choice between chasing the truck to the Colonel's island, or staying and helping Frank.

"This is a huge moment because it changes the flow of everything," says Smektała. "You don't try to go to the island at this point. You're just trying to save Frank, so it's a completely different mission that happens. Then you have to find a different way to get onto the island." In the demo, Aiden decides to pursue the truck. Later, he's told that Frank has died.

"A lot of those gameplay elements are things that are connected to choices and consequences, and so it's up to you which one of those you'll be able to have in your game. We've shown the grappling hook and paraglider. Every player will get those two items, and they can be upgraded. But you can upgrade them only if you act a specific way with specific groups that can give you those upgrades. It's another place where you make choices that will impact your gameplay style."

Those blueprints and upgrades are going to be an important part of defining your playstyle, because Dying Light 2 is all about making the most of the limited resources at your disposal. Aiden chases the truck, running across the rooftops that run parallel to the wide streets of The City's second district. Suddenly, a section of roof collapses, and he falls into the skyscraper below. It's dark, and full of infected. In the ensuing escape, I get a sense of Dying Light 2's survival mechanics. Enemies are quick and deadly, weapons are unreliable and prone to breaking, and every action uses your limited stamina bar. Upgrades, crafted weapons and items like the UV flare that can stun infected will all be a crucial part of staying alive.

Giving such weight to your many choices might sound like a nightmare for those of us predisposed to researching our options. But with so many choices, and so many possible outcomes and play styles, Dying Light 2 is saying that it's OK to follow your heart. Because whatever you choose, you won't see everything it has to offer in a single playthrough.