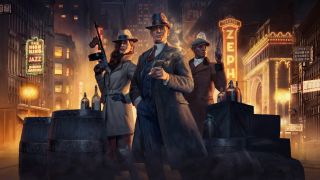 Empire of Sin was perhaps the most pleasant surprise of my E3 this year. Announced as part of the Nintendo Direct stream, I had—entirely unfairly—assumed it would be a casual, console-friendly strategy that would offer little to PC enthusiasts. Having now seen it in action, I can confidently say I was wrong.

It's the '20s, prohibition is in effect, and wannabe kingpins are jostling for a slice of Chicago's booming bootlegging scene. In Empire of Sin you pick one of 14 such bosses, most of whom are based on classic American gangsters such as Al Capone, Dean O'Banion and Stephanie St. Clair. Each boss will offer their own unique traits, including combat abilities, and empire and diplomatic bonuses.

In a hands-off demo, designer Ian O'Neill picks Al Capone, and immediately proceeds to show off one of his signatures: his Thompson submachine gun, aka the Tommy Gun, aka The Chicago Typewriter, aka Big Al's Chonky Bullet Friend (OK, I made that last one up.) After establishing his HQ, Capone immediately walks over to a speakeasy run by a neighbouring gang, the Meat Packers. Pulling out his gun, the action switches to a move-'n-action turn-based combat that will be instantly familiar to all XCOM fans.

One of Capone's moves—thanks to his signature weapon—is the sweep attack, firing off bullets in a wide arc and instantly bringing down one of the Meat Packers' goons. Capone finishes the other off with a brutal, execution-style kill. O'Neill explains that Empire of Sin features dynamic behaviours, and, by overusing execution attacks, characters will gain the cruel trait. And, if they continue to do it, they'll actually become serial killers.

I perk up at the mention of traits and dynamic behaviours. I've seen plenty of XCOM-a-like combat systems, but the real meat of a great strategy game is a detailed simulation ticking away in the background. Empire of Sin seems to realise this: as you build your empire, you'll meet what Romero Games is calling RPCs—recruitable player characters—who can fill roles in your underworld org chart. These characters will all have their own dynamic traits and relationships—and will react to the choices that you make and the promotions you hand out.

Based on the roles you assign RPCs, characters will also gain access to new combat abilities. We make one RPC who joins after Capone takes over the Meat Packers' speakeasy, Maria, the Underboss of the organisation. This gives her the bodyguard trait, meaning, as long as she's with Capone, she'll always be able to act in the first turn of combat.

The simulation governs what other bosses in the city will be doing, but also the actions of city factions such as the FBI. Federal agents will be working to uncover your illicit activities, just as rival factions will plot to undermine your operation. Your rivals may even try to work this to their advantage—having your grunts targeted by police who will attempt to flip them against you. Cops can even show up mid-combat, thanks to the world turn that triggers in each phase, pushing forward the simulation while you battle.

As you play, your empire will grow to include speakeasies, breweries, brothels, unions and protection rackets, and, as well as fighting with other factions, you can ally with them too. Romero Games is promising full mod support and DLC add-ons, too. I went into Empire of Sin assuming it would be a lightweight turn-based battler. I leave hopeful that it'll be a full-fledged strategy game, with plenty of dynamic surprises hiding beneath its deep simulation of '20s Chicago's seediest movers and shakers.