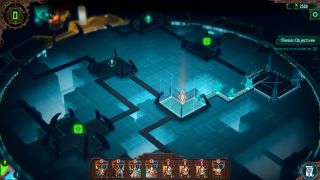 The Warhammer universe uses religion as a thematic pillar to derive its lore. Each of its many factions is devout to its own beliefs, which hold absolute authority. Mechanicus zealots worship the machine god Omnissiah, yearning for the promised immortality through replacing weak flesh with cold metal.

In Warhammer 40K: Mechanicus, the player assumes the role of Dominus Faustinius, a Magos high-commander in the Mechanicus order. Together with his Tech-Priests, Faustinius leads an exploration team to seek more knowledge of the Omnissiah on a newly discovered planet.

Faustinius commands several Tech-Priests, which are high-ranking soldiers who have undergone significant mechanification. Each Tech-Priest can be trained using a mix of skills from six disciplines: Explorator, Secutor, Tech-Auxilium, Lexmechanic, Dominus, and Enginseer. The disciplines each represent a specialized role. There is no “right” way to build a Tech-Priest, it all depends on the how and where you want them to excel.

The vast array of weapons, armors, and trinkets offer distinct tactical advantages to suit every play style. An intuitive customization panel invites the player to experiment with different augments.

The planet’s inhabitants, however, are hell-bent on protecting its relics. Necrons—a semi-dormant alien race that has completely transitioned into machines—now stands in Faustinius’ way. Ruthless and powerful, these grotesque robotic beings detest all things organic and aims to cleanse the galaxy of them.

Each faction’s character design reflects their heritage. The Mechanicus retains some of their biological parts, and appear as a mangled unity of flesh and machine. The corpse-like Necrons are mechanical and almost spectral, exuding a deathly aura.

With an intense focus on the lore and its complex universe, Warhammer 40K: Mechanicus delivers a pure, immersive single-player experience. The story is weaved by Black Library author Ben Counter specifically to stay true to the original lore.

The player must carefully evaluate the potential consequences of their action choices as they not only have an immediate ramification, but will also ultimately converge to shape one of three alternate endings. For example, choosing to examine a relic may grant you a tech boost, but may also summon a horde of enemies.

The journey embarks at the Mission screen. The game offers multiple missions simultaneously, so players can prioritize them based on their rewards. Some missions offer higher Blackstone, the currency used to purchase disposable troops. Others have fewer Blackstone, but grants powerful gear for the Tech-Priests in exchange.

Each mission has a procedurally generated battle map. Players traverse through the map to key locations and gather data. More often than not, these points are densely packed with Necrons. It’s essential to eliminate the opposition, as their corpses also hold valuable knowledge to the Mechanicus.

Whoever said “never bring a sword to a gun fight” has obviously never seen the badass chainsaw swords in Warhammer 40K. Battles in Warhammer 40K: Mechanicus are much more brutal than other titles in the same genre. Melee weapons are essential in Warhammer 40K. As such, the game abandons the cover system to give close-quarter combat a more vital role.

Special moves need cognition points to perform, which are collected either by scanning relics on the map, or by examining the enemy’s corpse. It’s a good tactic to expend a few troops to tank enemy fire as the Tech-Priests gather their strength for powerful attacks. Also, remember to assess the situation and distribute cognition points adaptively.

All-in-all, Warhammer 40K: Mechanicus has the potential to be one of the best entries in the franchise and maybe even contend as one of the best turn-based strategy games this year. Driven by its single-player campaign, it challenges your wits and awards your triumphs accordingly. Fans of Warhammer 40K will thoroughly enjoy the rich, complex lore explored through the compelling story. In addition, the excellent turn-based strategy battles are made even more engaging with abundant customization options and gorgeous animations.