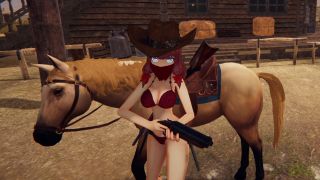 Steam allows anyone with an account to add tags that describe the games and software it sells—tags like Puzzle, Military, Story Rich, or LGBTQ+—and if enough people add the same tag (provided it's a tag approved by Valve, and provided the developer doesn't remove it) it becomes a featured category for that game. Red Dead Redemption 2 arrived on Steam today, and while looking at Steam's New and Trending list I noticed it was tagged as 'Adventure, Action, Western, Masterpiece.'

Masterpiece. It's a weird tag to see because instead of describing a genre or game type like most tags, it represents a one-word review—and last I checked Steam had a whole separate area for user reviews. Coincidentally, I just finished RDR2 yesterday (playing the Rockstar Games Launcher version) and while I loved it, and it's my favorite game of the year, I'm not sure I would call it a masterpiece. I'm not even sure what game I've played that I would describe as a masterpiece. It's a word with a lot of weight.

Luckily for us, lots of Steam users are comfortable spraying the term like a fire hose all over Steam, and the Masterpiece tag gets applied in a few different ways. As with RDR2, it's used earnestly for beloved games: The Witcher 3, Portal 2, FTL, Fallout: New Vegas, Disco Elysium, and other great games that feel deserving of it have been tagged as masterpieces.

Hello Kitty and Sanrio Friends Racing was released in 2015. It has a total of 44 Steam reviews, only 47% of which are positive. It is, however, a masterpiece. Indie horror game Fat Dude Simulator—"The main character is a guy called Jack. He really likes eating a lot and is constantly eating something" is the developer's enthralling description—has mixed reviews, costs 99 cents, and is another masterpiece.

Remember Godus? It has over 5,000 negative reviews, it's been in Early Access since 2014, but someone (perhaps its creator?) considers it a masterpiece, too.

Some uses of the Masterpiece tag are tougher to figure out. Car Mechanic Simulator Complete Edition 2014 is a masterpiece, according to Steam users. At first that feels like a joke: it's a game about fixing cars, not a deep, story-driven experience delving into the true nature of humanity. But it's also an extremely good game with thousands of glowing, positive reviews. And why should a game need to make you mull over important issues or reexamine your own morals to be considered a masterpiece? A great game is a great game, whether it's The Wolf Among Us or a sim about fixing cars.

Masterpiece is also used liberally by my absolute favorite type of gamer, the ones who have decided a game is great before it's even been released. Did you know Cyberpunk 2077 and Half-Life: Alyx are masterpieces? Now you do. So is Dying Light 2, due out next year, along with Doom Eternal, Crusader Kings 3, and even Frog Detective 2: The Case of the Invisible Wizard. It's a relief knowing all these games will be masterpieces. It'll make playing them and reviewing them much easier.

There are a only handful of Steam user tags like Masterpiece, Surreal, Difficult, and Atmospheric that register more of an opinion rather than state a genre or game type. And precious few, like the Gambling tag, can be used by players to make a joke or a statement (or both at once, as above).

There used to be lots of this: when Steam first added user tags in 2014, you could see all of them, including brutal and often unfair tags like Bad, Hipster Garbage, and Not A Game, though tags like those are now hidden from the lists of popular tags even if people still add them. Walking Simulator, a tag that started as a criticism of games like Dear Esther or Gone Home, is still shown, but it's kind of morphed into a compliment at this point: people genuinely do enjoy walking, exploration, narrative experiences, and games that don't just stick a gun in your hand and send you out to shoot stuff.

Masterpiece stands out as a weird tag. It's a review, it's a joke, and it's a way to fawn over or dismiss a game you've never played. Should it be shown on the front page of Steam where people go to shop for games? Probably not. But I'm glad it exists, because otherwise I would never have discovered there was a game where you could have sex with Stalin.

It's called Sex With Stalin. It has no reviews, but trust me, it's a masterpiece.