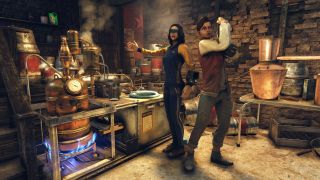 A number of Fallout 76 players found themselves stripped down to their skivvies last month, courtesy of a hack employed by unscrupulous Wastelanders that enabled them to swipe entire inventories from other players. Bethesda was able to fix the exploit fairly quickly, but restoring lost gear was another matter entirely.

For one reason or another, Bethesda wasn't able to simply put replacement gear into players' packs, and so it promised that it would figure out how to compensate players for their losses at some point down the road. The solution was revealed late last week by redditors including JedediahJedi and Boavisteiro (via Kotaku), and it's honestly quite a bit more complicated than I would have expected.

Apparently it really is impossible for Bethesda to restore lost inventory items, because what it's doing instead is giving players clones of their pre-theft characters, with modified names. "Once restored, this character will have the entire inventory of items, gear, and scrap (100% of your stuff) that it possessed on December 20, 2019," an email sent to impact players says. "In addition we will be providing you with 8250 Atoms to help you in your adventures."

That's not the end of the clunkiness. Players who want to merge their pre- and post-theft inventories (and I imagine most of them would) will have to request a "Secure Trade transfer service" with a Bethesda customer service agent, who will meet them on a private server to swap all their stuff around.

I think the compensation is more than fair: A bundle of 5000 Atoms goes for $40 on the Microsoft Store, so that's not nothing, and everyone gets all (or nearly all) of their gear back too. It's the wholly inefficient process required to make it all happen that I think is interesting. Some jerk with a script can steal all your stuff, but Bethesda, the big-time game studio that actually makes Fallout 76, can't just pop it back in—and a character merge literally requires the digital equivalent of an off-the-books meet-up with a guy in a dark alley behind Burger King. That's a little weird, right?

Despite all that, the important thing is that the problem is solved, and people by and large seem happy with the outcome: As jason9045 put it, "That doesn't suck." I've reached out to Bethesda for more information on the fix, and will update if I receive a reply.