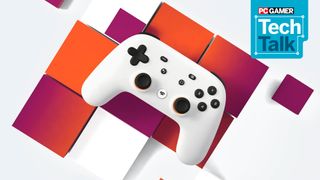 Cloud gaming services have been attempted by numerous companies over the past decade or more. Remember OnLive? Yeah, that didn't turn out so well. The same goes for some other services like G-cluster and GameFly. But others have fared a bit better, like Sony's PlayStation Now, and Nvidia continues to work on improving GeForce Now (which has been in open beta for what seems like an eternity, never mind Nvidia's Grid service before it). Now Google Stadia is set enter the fray when it launches next month. Are people really looking for cloud game streaming options, and is there that much money to be made?

As to the former, the jury is still out, but the first truly successful cloud game streaming service stands to make a ton of money. People have likened it to Netflix for games, and if you look at the Netflix numbers—still over 150 million households paying $10 a month—you get an idea why this is such an attractive market. Besides, companies like Google, Amazon, and Microsoft already have massive datacenters, many of which likely aren't being fully utilized, so there's untapped potential just waiting in the clouds. Azure ("Intelligent Cloud") brought in $9.4 billion for Microsoft last year, one of the company's fastest growing markets.

The difficulty with cloud gaming is that it requires more resources than just a video stream. Netflix basically feeds its subscribers video streams that have already been processed. Cloud gaming means you have to run the game in real-time, encoding the output, and then send that to the client. And all of this needs to be done with as little latency as possible.

Stadia needs to figure out a lot of things, like how many PCs need to be in each Stadia datacenter, how many datacenters worldwide, pricing, bandwidth, and more. But it's not actually going to be that difficult to make money if the service as a whole takes off. Let me run through some numbers I've been thinking about.

At first, I thought the idea of charging only $10 per month for basically unlimited cloud game streaming was too little. The specs of Stadia suggest it's basically going to cost around $750-$1000 per PC, just for the initial hardware. Google also needs to figure out how many PCs are needed for each region—too few PCs and people get upset waiting in queues; too many PCs and Google wastes money.

There's also the question of power use. PCs consume power, and even with 95 percent efficient PSUs in a datacenter, I'd guess rendering games at 4K60 would pull at least 250W, or around $10-$15 per month in power. Besides that, the amount of power going into a datacenter is usually fixed, so just adding lots of new Stadia PCs may not be possible without some costly upgrades. Google has to pay for infrastructure, the IT people to service everything, bandwidth, etc. It sounds difficult and expensive, and $10 per month seems pretty cheap. But let's talk some hard numbers.

$10 per month for streaming access to an $800 PC isn't that bad, assuming the latency is good. Sure, you're locked into Stadia, can't run other non-Stadia games, and you have to buy the games at Stadia prices. But if those prices are the same as on other platforms, it's not really that much worse than plunking down $300 or more for a console, and then buying games on top of that—that's 30 months' worth of Stadia Pro, or you could just stream at 1080p60 for free. And compared to a basic gaming PC that could cost $750 or more, that's years of Stadia Pro subscriptions.

One person or family paying $10 per month seems like a deal, then, so how does Stadia make money? Breaking things down, there are 720 hours per month (using 30 days each month, which is close enough). Even dedicated gamers don't usually play more than 30 hours per week, meaning Google could share a single PC between six players. Realistically, a lot of people might only play for 10 hours (or less) per week, so you could share a single Stadia PC among 18 accounts.

After power costs, that leaves $40 to as much as $160. And people who  play more are more likely to buy games, which balances things out among the heavy and light gamers—each game purchased likely gives Google at least a portion of the sale, so that could be another $50-$100 per deployed Stadia PC each month. Even accounting for the cost of hiring IT staff to maintain things—staff that's probably already maintaining other servers—Stadia potentially provides users a gaming PC in the cloud that pays for itself every ~10 months at worst, and every 2-3 months at best.

Take some of that profit and roll it into regular hardware upgrades, and every 2-3 years the Stadia PCs become faster and/or more efficient, unlike a home PC that stands still and watches the industry march on. The first Stadia PCs may only be packing the equivalent of an RX Vega 56, but two years from now they could be running RX 6900 XT cards—or whatever AMD's next-next generation of GPUs ends up being called.

That's not to say there aren't difficulties to overcome. Bandwidth on the user side is still going to be a major concern for anyone with a data cap. 20Mbps (1080p60) means 9GB used for every hour of gaming. Comcast and other ISPs with a 1TB data cap would be limited to around 80 hours of game streaming per month, and 4K60 at 50Mbps would eat 22.5GB per hour—I could chew through my entire monthly Comcast allotment in just 45 hours. Yikes! Don't even think about streaming on a smartphone without some sort of plan or agreement so that the data usage doesn't count.

But if a company can overcome the latency and bandwidth hurdles, game streaming from the cloud could be huge. It's obvious why Google and many other companies are interested in making cloud gaming a reality. Just like Netflix, the first company to get it right stands to make billions. Ten years from now, when 5G is widely deployed, we could even end up with a Ready Player One dystopia. Personally, I'm not giving up my home gaming PC any time soon, but then 15 years ago I never imagined optical discs would basically die out before 2020.