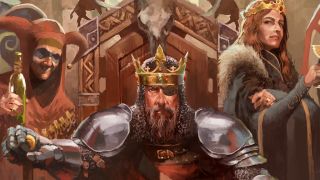 The Crusader Kings board game Kickstarter only launched this past Saturday at PDXCON 2018, but it's already tripled its target on the crowdfunding platform. Creators Free League set a goal of 500,000 SEK (£42,466, or about $57,000), but as of today it has over 1,500,000 SEK of pledges with 29 days to go. Clearly, there's a huge appetite for a board game based on this particular series, and it bodes well for the coming adaptations of Cities Skylines, Hearts of Iron and Europa Universalis.

In Jon's write-up of the announcement on Saturday, he noted that Crusader Kings is "an area control game with a strong character element". Paradox has called its move into board games as a "mission to expand the IP", and it's based on research that shows 40% of their audience play hobby board games too. This crowdfunding campaign result only underlines that, really. Free League has also hit six of its eight stretch goals for additional miniatures, and the other two are within reach.

Crusader Kings' expected release date is November of this year. Expect impressions of Paradox's board games from Jon later this week, once he's recovered from his jet lag.