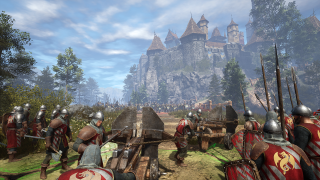 Back in the days when dragons and magic and Amiga computers ruled the land, King’s Bounty arrived on the gaming scene. The RPG-strategy series received plenty of treasured sequels over the years, but none quite as ambitious as its latest entry - King’s Bounty II.

This video is the first in a series of development diaries on King’s Bounty II, introducing players to the three pillars of the game: Exploration, Hero Development and Combat.

The game gives players three characters to choose from, each with their own unique story that will shape your experience. The turn-based combat will be familiar to fans of both the series and tactics games, with features like initiative-based turn order and a hex-based battle grid.

Notably, the video also talks about how King’s Bounty II is the first time the series will use a third-person perspective and fully 3D battle screen. A big leap forward that will no doubt be appreciated by the series’ fans!

Stay tuned for more King’s Bounty II dev diaries, which will dive into the story, combat systems and other areas of the game.

Intrepid heroes can find out more information about the game at https://kingsbounty2.com/en/.