Skip to main content
Sponsored
PC Gamer is supported by its audience. When you buy through links on our site, we may earn an affiliate commission. Learn more 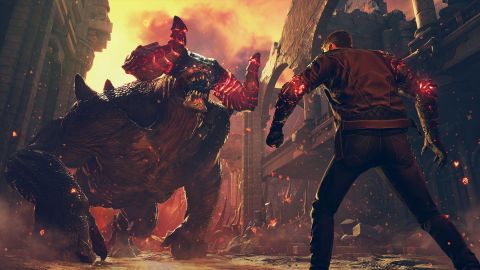 The more we know, the harder it is to decide. We start to see shades of grey where in our ignorance there was once only black and white. And for most of us that’s just when we’re picking out a trendy harissa flatbread on our lunch hour. For Desmond, player-character in Devil’s Hunt, the stakes are a bit higher.

Like many videogame protagonists before him, Desmond finds himself in the middle of a war between good and evil, and able to affect the outcome thanks to his supernatural abilities. Unlike the others before him, however, Desmond’s free to choose either side.

He was born with a silver spoon in his mouth, the son of a wealthy businessman, but the young man’s luck polarised as he grew older. He didn’t just become bitter and twisted - he physically lost his humanity, and let in demonic forces. Happens to the best of us, Des. But it doesn’t mean he’s railroaded down the path of evil - he’s angry, yes, but he can see both sides of the conflict, and commune with both aggressors as they vy to win his alliance.

Based on the 2012 Paweł Leśniak novel Equilibrium, Devil’s Hunt takes place in a smouldering high fantasy world on the verge of destruction, as the agents of light and darkness wage a very real war with a very real bodycount. In parts it still resembles the world we recognise - a moody streetlamp lighting ripped-up asphalt here, a seedy motel room with peeling paint walls and gaudy neon signs outside there. This blend of familiar and fantasy gives Devil’s Hunt its own character, separate from the usual fantastical dungeons where reality’s not represented by as much as a street sign.

But as Desmond ventures further, the scenery shifts into fiery hellscapes, gloomy Slavic woods Geralt of Rivia might think twice about entering, and ancient structures guarded by - well, they’re straight-up monsters. Horns, teeth, the lot. At any point you might have to face off against the like of the Heavy Demon, who drags a club of twisted metal and burning embers almost as big as his juggernaut form along with him. Or the Forsaken, whose cadaverous form is marked by hellish crystalline protrusions.

This being a game about duality, it’s only fitting that Desmond fights with both his human and demonic facets. Even without his powers, he’s an accomplished brawler and wields his fists with the kind of heft you need to make every connection feel sweet and gratifying in a third-person action space. Mechanically and visually it shows an influence from titles such as Rocksteady’s super-slick Arkham series and Monolith’s Shadow of War. Bombastic melee animations, counter indicators flashing above enemies’ heads, and 1 v many encounters.

Of course, if you also had demonic claws you’d use them, wouldn’t you? So it goes here. Three different fighting styles - human, unholy, and void, each have their pros and cons, and are best deployed against specific enemy types who are weak to them. When the occasion calls for it Desmond changes his entire form, and opens up a different skill set - one that has uses outside of combat as well as within it.

With its basis in literature, Devil’s Hunt aims to be more than an action game with some angels and demons floating around in the periphery of all the punching. Narrative is a real emphasis here, with over two hours of cutscenes spanning the experience and depth of characters even beyond Desmond’s central conflict.

Devil’s Hunt is the debut release from Layopi Games and published by 1C Entertainment. It’s available on Steam from September 17th 2019 with a 10% discount at launch with console versions following in the beginning of 2020.