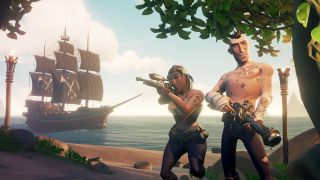 It didn't get off to a brilliant start, but Sea of Thieves, our best ongoing game of 2019, has tempted more than 10 million players to explore the pirate and skeleton-infested ocean since it launched.

Executive producer Joe Neate shared the big milestone this week, adding that it's thanks to its community of pirates who have led to the game's success.

"For everyone at Rare, the Sea of Thieves community represents the very best of what gaming can be. It’s home to players from more than eighty different countries, bringing together gamers on Xbox Game Pass, Xbox One and Windows 10 PC and creating countless stories and moments that people can treasure. Seeing these stories shared through social media or other community spaces is something that inspires the team every day. To every person who’s played Sea of Thieves, thank you."

In this case, it's more than a platitude. Sea of Thieves launched to a mixed reception thanks to its stunning world but dull activities, but people stuck with it, formed crews and made their own fun. To Rare's credit, it worked hard to make the promising game live up to expectations, and over time pirates stayed with it were rewarded with a much better MMO.

Since it launched in March, Rare has introduced a pile of new challenges and nautical activities, a large story campaign, timed events, crossplay and more cosmetics than you could possibly hope to drape over your pirate. Most of the new additions have been entirely free, with the exception of pets, which have proved to be more than worth the cash.

Rare is continuing the free updates this month, celebrating legendary pirates by getting players to go hunting for Easter eggs. Find secrets and you'll be rewarded with new commendations and, more importantly, new tattoos.

It's worth noting that the impressive 10 million figure doesn't equate to 10 million active players and includes people who played using the Xbox Game Pass. It's still a lot of pirates, though, and hopefully enough stick around to ensure more years of skulduggery and misadventures.