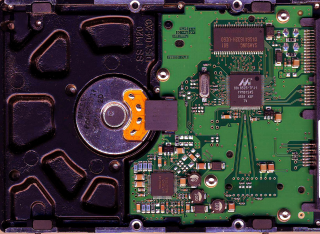 Storage used to be considerably simpler, with computers using mechanical hard drives for their operating systems—desktops with 3.5-inch drives, and notebooks with smaller 2.5-inch models (in a pinch, you could use a notebook drive in a desktop, but it meant a speed penalty). For the geeks, the differentiating factors included the number of drive platters and the speed of rotation, with 7,200rpm much preferred over the more pedestrian 5,400rpm. However, after years of slow evolution in storage, we’re now in the midst of a storage revolution, with the shift away from traditional mechanical hard drives.

At the bottom end of the storage rung is eMMC, which stands for “embedded multi media card.” This is the descendant of MMC, a flash-based storage format in the physical package of a flash card. MMC competed with Secure Digital (SD) cards a decade ago. However, SD cards became the standard and MMC ended up being odd man out, as digital cameras and laptops offered SD card slots. MMC ended up transitioning to eMMC, and the embedded designation refers to the memory controller embedded into the package of the memory.

eMMC gets used in a variety of portable devices, including smartphones and tablets. More recently, eMMC even has seen action to replace a traditional hard drive at the bottom end of the notebook market. In these laptops, such as the HP Stream and the Acer Aspire One Cloudbook, which can be had for around $200, one of the many corners cut is the storage department.

While eMMC offers the advantages of affordability and the reliability of no moving parts, the biggest tradeoff is having speeds more akin to a mechanical drive than an SSD. In addition, these eMMC drives are permanently attached to the motherboard, and are not upgradeable or replaceable like a conventional hard drive solution.

Thankfully, while SSDs steal the spotlight these days, their mechanical brethren are still innovating. These mechanical drives are now capable of 10 terabytes of storage in a single 3.5-inch drive, a palatial capacity that would have seemed outlandish just a few short years ago. While so far, the HGST Ultrastar He10 is an enterprise drive, its technology should (hopefully) trickle down to the consumer market in the not-too-distant future; Seagate is working on the technology as well.

The Ultrastar He10 achieves this by having seven platters that get stuffed into a standard-size hard drive enclosure. The so-called “secret sauce” that makes this happen is that the drive is hermetically sealed, and filled with helium gas. Yes, the stuff that goes into party balloons and is lighter than air also has the property of being less dense than air, which reduces the air resistance of the spinning platters. This translates into significant improvements in reliability and power efficiency. The speeds also get boosted with a purported read speed of 249 MB/s; while slower than almost any modern SSD, it is still approximately double the speed that mainstream mechanical hard drives had a few years ago.

Over the next few years, expect to see ever-increasing capacities for mechanical hard drives, made possible by this application of helium. These drives may also get paired with larger amounts of onboard cache, currently at 256MB for the He10, and even hybrid configurations.

SSDs with SLC vs. MLC vs. TLC

Solid state drives (SSDs) have been a boon to computers, speeding up storage processes significantly since their debut to consumers in 2007. After using a desktop with a good SSD, few of us would willingly go back to a mechanical hard drive for a boot drive.

One of the challenges of SSD technology has centered around the ability to offer a large-capacity drive at an affordable price. This would effectively allow the SSD to be the single storage solution for a rig, rather than the two-drive solution that many users currently employ, with an SSD for speed and an HDD for larger capacity.

When comparing SSDs, one of the specs to be aware of is the type of NAND chip used. This affects the memory density, which in turn determines the write speeds, power consumption, performance, endurance, and cost of the drive. The types of NAND flash chips used for the consumer market include: single-level cell (SLC), multi-level cell (MLC), and triple-level cell (TLC). Each of these flash chips holds many cells, which provide the storage space for the read and write cycles. Here are the traditional differences between the NAND flash chip types:

Above is a representation of the data storage capacity of SLC, MLC, and TLC. It visualizes why TLC has the most data capacity per cell, and why it is the most cost effective at this time. Quad level cell (QLC) is being developed, which would theoretically offer even more capacity at a higher density, but is not expected in the short term.

While this was the traditional division of NAND types, more recently, performance drives have featured a mix of the types of NAND used. For example, the SanDisk X300 SSD features a write buffer of SLC NAND flash, while the main storage goes to TLC; by combining the flash types, the overall performance characteristics of the drive are enhanced, at an attractive price. This is in comparison to an entry-level drive, such as the OCZ Trion 100, which uses TLC NAND flash across the entire drive, but performance suffers. In other cases, a small portion of the MLC or TLC gets used to store only two bits as in SLC, in a “pseudo-SLC” configuration.

Serial AT Attachment, better known as SATA, has been the way storage devices were attached to your rig for over a decade now. Making its debut in 2003, SATA offered a significant leap forward from the previous Parallel ATA (PATA) interface. The original SATA Revision 1.x offered speeds of 150MB/s and was designed for mechanical hard drives. SATA was later updated to SATA 3Gbps, which doubled the speed to 300MB/s, and subsequently to SATA 6Gbps, which again doubled the speed to 600MB/s. At the time, there were no consumer storage devices running anywhere near the fastest SATA speeds, providing headroom for storage speeds to grow. More recently though, SSDs caught up, easily exceeding SATA 6Gbps' speeds, putting the pressure on for even faster interfaces with the current data throughput saturated.

M.2 is the replacement to the mSATA standard, and it was designed to be more suitable for storage, with targeted use in mobile devices including tablets and Ultrabooks. The specification for M.2 is composed of four PCI Express lanes, and one SATA 6Gbps port, providing a maximum bandwidth of 4GB/s. While the M.2 spec is relevant here for its use in mobile SSDs, it also gets used in mobile devices for such applications as Wi-Fi cards, Bluetooth, and GPS modules.

The M.2 interface allows for a variety of package sizes, giving flexibility in design, and all in less space than a traditional hard drive. The maximum bandwidth for SATA based M.2 is still limited to SATA 6Gbps speeds, making it more suitable for notebooks, and less so for desktops. PCIe-based M.2 however can run at up to x4 Gen3 PCIe lanes, or 3980 MB/s (see below).

In the quest for more bandwidth, SSDs have been repackaged for the PCI Express (PCIe) interface. PCIe was introduced in 2003, as a replacement for the older PCI interface. PCIe is most commonly used for GPUs, with their high bandwidth requirements. Current motherboards are based on the PCIe 3.0 standard, which provides for 8GT/s (GT/s refers to a Gigatransfer rate, which converts 8GT/s to approximately to 6.4Gb/s). The latest revision of PCIe is 4.0, and has data throughput rates of 16GT/s (about 12.8 Gb/s) with products expected in 2017. With this much bandwidth for data available, this should give some serious headroom for speeds on storage devices to grow substantially over the next few years.

Non-volatile memory express (NVMe) is not a new interface, but rather a protocol, originally developed for enterprise, as a scalable host controller interface to optimize and standardize PCIe SSDs. Like many products that start out as “industrial strength,” NVMe is making the transition to the consumer market. The first retail NVMe consumer drive is the Samsung 950 Pro, and in our testing it was ridiculously fast, with read speeds over 2,000Mb/s and write speeds over 1,000Mb/s! With these kinds of speeds, especially considering that this is the first drive for consumers in this category, this promises a quantum leap in storage performance analogous to the jump that SSDs took over mechanical hard drives.

For PCIe drives with NVMe to work as boot devices, they need to be supported by the motherboard BIOS. The newer Z170 boards will all support this, with select older Z97 and X99 motherboards supporting NVMe as well. Technically, there's nothing stopping even older M.2 PCIe implementations from support NVMe, but the time and testing required to update the motherboard BIOS makes such support unlikely.

The storage system of the computer was quite stagnant for some time with reliance on mechanical hard drives—and little else. Even now, there is room to innovate with mechanical hard drives with ever larger capacities, and modest increases in their speeds. With the transition to SSDs for main system storage, there has been considerable increase in storage throughput. Now that the SATA 6Gbps throughput limit can be saturated by SSDs, it will require a transition to PCIe with NVMe to provide the needed headroom for SSDs to get even faster. Then there is Intel and Micron's promising 3D XPoint technology, which hopes to leapfrog NAND altogether. While little is known about the technology at this point, the companies are saying that it could run up to 1,000 times faster than traditional SSDs —warp drives, anyone?