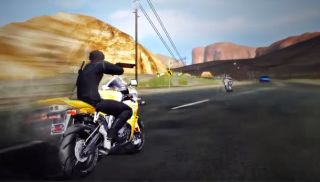 In May, we reported that Road Redemption, the Road Rash-inspired racer by New Orleans' Darkseas Games, was successfully funded on Kickstarter . It aimed for an initial goal of $160,000, but ended up with $173,803 from 4,409 backers. It garnered support based solely on the team's enthusiasm and one promising trailer . The latest video of the shows that it's still a little rough around the edges (it's far from finished), but that Darkseas is definitely headed in the right direction.

In addition to graphical improvements Darkseas has made to Road Redemption since it launched the Kickstarter campaign, the trailer shows off early versions of the uzi and grenade launcher weapons. More importantly, it's really starting to look like what Darkseas set out to accomplish: a contemporary adaptation of Road Rash's combat-oriented, motorcycle racing game. It looks fast, unforgiving, and pretty damn fun, even in its early state. The least it could do is help us erase the memory of that other motorcycle game that came out recently.

Darkseas has yet to reveal when backers should expect to get their hands on an alpha build of the game, but said that when they do, it will come with a four player split screen mode. As we reported previously , Oculus Rift integration will also be added to Road Redemption, eventually.