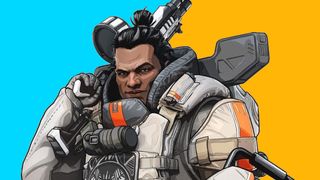 Need to know the strengths and weaknesses of all the Apex Legends characters? Run each map like a pro and become the most valuable player in your squad as you master your favourite legends' abilities. Knowledge is the one weapon that will always keep you at the top of your game.

Flip through this ever-growing list of all the Apex Legends characters to get an idea of where they excel. School up on how to construct a balanced squad that will earn you the coveted 'Champion' victory screen. Here's each character's unique abilities and perks, as well as some handy tips to help elevate your skills.

For balance reasons, a few of Apex Legends’ characters have universal passives to help them with larger hitboxes, or to adjust for the smaller size of their hitboxes. These were an attempt to level the playing field a bit by Respawn.

Fortified
Legends with the Fortified passive are easier to hit, so they’re a bit tougher as well: Fortified Legends take 15% less damage from all attacks, and are immune to the slow effect from weapons fire.

Strengths: An aggressive playstyle suits Bangalore, advancing with her speed boost and smoke. She can zone enemies with her ultimate, and smoke to set up flanks, retreats, and revives.

Tactical: Eye of the Allfather

Ultimate: Beast of the Hunt

Strengths: Bloodhound is one of the strongest aggressive legends. The speed boost from their ultimate is powerful enough to take on an entire enemy squad, not to mention finishing off wounded individuals. Their passive ability can help the team decide where to head next, while determining how far away enemies are lurking. Eye of the Allfather will alert your squad of nearby hostiles and traps. This helps the rest of your team to avoid unnecessary damage and encourages them to head towards you to eliminate nearby threats.

Tips: Ping opponents promptly and update your teammates when you notice enemy tracks. You build your ultimate ability reasonably quickly so activate it just before you attack an enemy squad to make the most of the speed boost. Consume spare Ultimate Accelerants (but share with legends like Lifeline and Wattson) to head into firefights with a healthy advantage.

Strengths: Gibraltar is the defining team-player, his abilities are all best-used in support of his allies in order to protect or compliment them. Safeguarding revives, looting, and heals with Dome of Protection and his Defensive Bombardment are his bread and butter.

Tip: Layer your ultimate and tactical on the same spot if you want to try to discourage anyone from disrupting your revives.

Strengths: Lifeline is both a powerful combatant and support Legend. Her Combat Medic passive lets her duck out of a firefight to heal and return, making her surprisingly durable, and she’ll help smooth out rounds where you don’t find the right loot.

Tips: Your Care Package is hard cover, so don’t be afraid to use it for temporary shelter or even to add some cover to a spot you know you’re going to fight in, like an exposed roof. Place your healing drone so that it can latch onto multiple teammates and remember that you can push it along, if you need to. Consume Ultimate Accelerants for the duration of the game to earn more Care Packages.

Tips: Grab an enemy with your grappling hook to bring them to you for the easiest shotgun blast of your life. Grapple to higher ground to get the drop on enemies, and swing away to retreat when you feel overwhelmed.

Tactical: Into the Void

Strengths: Capable of engaging and disengaging herself and her squad, Wraith is very slippery and an excellent point person. Coordinated Dimensional Rift usage can end fights before they even begin or salvage lost fights.

Tip: One creative use of Wraith's portal is to place one in a doorway defensively, preventing anyone from entering a structure that you're holed up in. If an encounter with another squad looks as though its about to go pear-shaped, use your ultimate to transport allies to safety and regroup. Guard the other end of the portal to catch aggressive opponents, if they try to follow you.

Strengths: Caustic is defensive focused, with no mobility bonuses and a setup time on his tactical ability. As the ring shrinks in size, he can become the most deadly Legend. He’s also got an edge in blocking doors and putting out gas clouds to revive teammates or heal.

Tips: Throw down and shoot a Nox Gas Trap when you need to heal to create some instant cover (and a deterrent to push you). When dropping in hotspots, place traps early on in close proximity to your team while they search for loot. This will soften up opponents that are competing for gear and make them easier to eliminate.

Strengths: Mirage’s specialty is causing confusion. Use Psyche Out if you're unsure of which threats lie ahead. Send in your decoy to test how safe an area is before rushing in to loot, or use it to initiate a fight. His ultimate can excuse you from sticky situations, giving you a brief window in which to escape and may just be the distraction your team needs to win.

Tip: You can run decoys into traps like Wattson’s fences or Caustic’s gas to learn where they are for free.

Strengths: As the king of mobility, Octane is all about chasing, leaping, and escapability. Not just adept at flanking, you should also be juking back and forth to make yourself an absolute nightmare for enemies to hit during firefights.

Tip: Unlike Pathfinder's zipline, you’re still perfectly accurate while in the air off your jump pad, so use it to get great air shots on the way into the fight. Don't be afraid to continuously use your Stim to get out of trouble, either.

Strengths: Wattson is the ultimate in defensive specialists. She’s all about creating defensive strongpoints that are difficult to assault, and much like Caustic gets more powerful as the ring shrinks in size.

Tip: Hide your Perimeter Security nodes behind the sides of doors to protect them from being shot. Place Interception Pylons behind some cover to stop enemy teams from removing it too quickly.

Strengths: Crypto excels at surveillance and is well-suited to keen team players. All three of his abilities revolve around his drone. He's especially valuable on the World's Edge map as he can locate enemy squads from long distances and ping useful gear. If a teammate dies outside the ring, Crypto's drone can even retrieve their banner, avoiding the risk of having to backtrack, or pick another fight when the squad is a person down.

Tips: Always get behind cover before deploying the drone and alert teammates when an enemy is flagged. Coordinate with your squad when using Crypto's ultimate to ensure they can attack directly after the EMP blast. Remain close to the rest of the team and send the drone out as often as possible.

Strengths: Revenant shines as a supporting legend in a squad that opts for an aggressive approach. Hunt down enemies with his passive ability and access buildings faster by climbing the side of them. Revenant's tactical silences opponents' abilities, which puts them at a brief disadvantage as your team pushes. His ultimate promotes aggressive play by protecting the team and transporting them back to safety with low health if they're downed.

Tips: Use Death Totem and Silence just before you engage an enemy squad. Place the Death Totem in a safe spot that's shielded from enemy fire. Communicate with your team to ensure they're aware that you're activating your ultimate. Silence as many of the enemy squad as possible, but if they're split up, focus on legends like Lifeline, Bangalore, and Pathfinder.