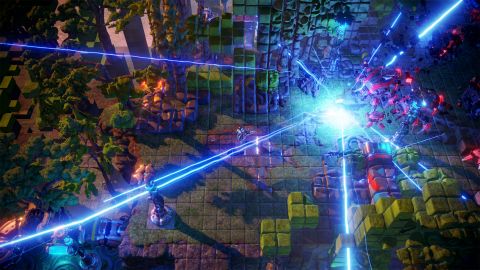 Slight in form, but deep and consistently satisfying. Nex Machina is a gem of a shooter.

What the hell just happened? Your first go of Nex Machina will leave you feeling pleasantly dazed, as this exhilarating and ferociously tough twin-stick shooter sucks you in and spits you back out. It’s the kind of game to make you shuffle forward a little in your seat, as you take a deep breath and prepare to dive in for another attempt.

It comes from Finnish developer Housemarque, which has all but cornered the market in classic arcade shooters with a contemporary sheen on PlayStation consoles in recent years. This time, however, it’s free from Sony’s shackles, and working alongside the great Eugene Jarvis, whose work Housemarque has essentially been riffing on for quite some time. So there’s a smattering of Defender in there, a more generous helping of Smash TV, and, by extension, a great big wodge of Robotron 2084.

Like those games, it dispenses with the niceties to get you into the action that much quicker. All you need to know is that it's sometime in the future, we’ve all been too busy gawping at our phones to notice the machines getting smarter than us, and lo and behold, they’re keen to assert their authority over humans by wiping us out. That’s your lot as far as the story goes, but that’s really all you need. As the game starts, your brave little warrior rides into the fray on their futuristic space bike, leaps off and mayhem subsequently ensues.

The default difficulty setting on the main Arcade mode is called Rookie: that name alone will encourage a certain type of player to scoff and start on the next level up, Experienced, but Nex Machina tells you this is the ideal place to learn the ropes for a reason. You should take that advice, not least since Housemarque pulls off one of the hardest tricks in games.

Often, on this type of game, the lowest difficulty can feel slightly patronising, as if it’s going easy on you. That’s not the case here. The action is still fast, still intense. The arenas are still unsettlingly cramped. Enemies still march toward you in overwhelming number. The main point of difference is that they move slightly slower and explode slightly quicker, so you don’t quite get that same why-won’t-you-die horror as you retreat into a corner, furiously unloading round after round into a giant spider-tank thing that’s soaking up the best you can dish out and asking you if that’s really all you’ve got.

Even so, you’ll still get those moments where your back’s against the wall, and you’re barely a pixel’s width from death when an aggressor falls—you then yell out in simultaneous triumph and relief, while strolling straight into a bright pink projectile that seems to have been floating lazily towards you for the past several minutes (in reality: two seconds). Complacency and lapses in concentration are ruthlessly punished.

But daring? Daring can get you somewhere. Nex Machina is tailored towards moments of mad heroism, as each level gives you a number of humans to rescue before they’re harvested. Your high score depends greatly on how many you save, but also on the timing of their retrieval: after grabbing one, a combo meter will slowly drain, refilling only when you rescue the next. Then again, worrying about your own survival will be priority one for a good while. Still, even here you’re encouraged to take the odd risk: a smart bomb power-up, for example, invites you to dash close to clusters of machines before squeezing the trigger to detonate them and free some space for yourself.

Rather than having to constantly back away from waves of enemies (though you’ll spend plenty of time doing that), or herding them round in a circle (that, too) you can press the left trigger to quickly dash in whichever direction you choose. When all seems lost, this can get you out of the tightest of squeezes, not least once you’ve collected a pickup which triggers a small explosion within a narrow radius for each dash. Pair that with a triple-dash power-up and you’re laughing.

There are optimal routes through the mayhem, but they have to be teased out over dozens upon dozens of repeat attempts. Eventually, you’ll reach the stage where you’ll find yourself waiting until the last possible second to rescue a human to keep your chain going as you weave through this deadly traffic. Until then you’re adapting, improvising, desperately trying to control the flow of enemies while attempting to prioritise threats.

You could be forgiven for thinking it’s nothing more than pure chaos, but it’s meticulously organised chaos. Most of the time it’ll look like you’re winging it, and you often will be. But if you need some tips, you can watch replays of the best players from the leaderboard menu and see how it’s really done.

It’s a lovely game to watch, too, the dashes adding dynamism to your character’s movement, the bright, colour-coded outlines ensuring the action stays readable even when things are exploding into hundreds, maybe thousands of voxels around you. Even the transitions between stages are glorious: the six worlds take place on huge, complex superstructures, which your hero navigates by jetpack. Sometimes they’ll dive down to a lower level, or climb way above the previous area; sometimes, they’ll zip over the side of a stage and it’ll flip 90 degrees as they touch down on the next.

To some, six worlds (each comprising 15 sections) might seem a shade on the slender side, especially since a single run takes less than an hour. Beyond tackling the Arcade mode on higher difficulties, there’s an Arena mode for individual worlds, and variants where bullets and enemy spawns move faster, or where your score only increases while your human combo is still running.

For the voracious consumer, who sees games only as something to devour rather than savour, that mightn’t seem like particularly good value. Everyone else, however, should buckle up and settle in for a breathless modern arcade classic that delivers more thrills per minute than almost anything else out there.

Slight in form, but deep and consistently satisfying. Nex Machina is a gem of a shooter.