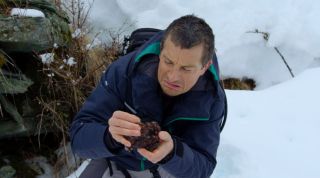 James Davenport made Bear Grylls eat bear poop. Technically it was Netflix or whoever bankrolled the idea of an interactive survival show that's really responsible for the fact a man was paid to eat bear poop on camera but here we are either way, in the reality where you can sit down in front of Netflix and say, "show me a man eating shit." We decided to brainstorm some other shows that might benefit from interactivity.

Christopher Livingston has not really been playing Grand Theft Auto 5, but he's been getting joy out of it anyway by watching mishaps from roleplay servers. Mainly it's people punching each other by accident, because while you can use GTA Online to play out conversations and romance it is still a game that wants you to be getting violent on a hair-trigger. A simple misclick because you wanted to refocus on the game after alt-tabbing away is enough to start a fight.

Tom Senior's been playing Pagan Online, a new action-RPG that he describes as a mash-up of Diablo and Warframe—and a fun one. It's structured around short missions that you bash your way through, then use the loot to unlock new characters and craft items. There are so many action-RPGs to choose from at the moment, but it does look slick.

Meanwhile, there still aren't enough good vampire games on PC. Sure, there's Bloodlines and some will make the case for Vampyr, and you can always replay Morrowind or one of the later Elder Scrolls games as one of the undead, but that's still not a lot of choice. Joanna Nelius has been playing The Sims 4 as a vampire, which is of course a thing you can do now. Her tale of accidental human battery-farming is a wild one.

Me, I've been playing a bit of Feather. It's one of those gentle chillout exploration games, and in this one you're a bird flying over an island. There are plenty of things to discover, little secrets that make it feel rewarding as I wander about like I did in Proteus, but just the act of flapping about hearing some relaxing music play is the real point. It's a meditation.

Enough about us. What about you? Is anyone playing Forager, the farmlife sim that's also a Zelda-like adventure game? Or Totally Accurate Battle Simulator, the physics-disaster history lesson? Let us know!