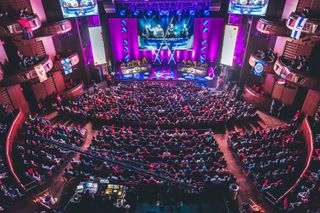 2016 is well and truly behind us and it’s time to look forward to what 2017 has to offer. There’s plenty to watch this weekend, from top-tier Dota 2 to the Overwatch Winter Premiere. We even have action from the Hi-Rez Expo as both the SMITE World Championship and Paladins Invitational are set to thrill fans. All the details on this weekend’s action can be found below. Have a great weekend!

ESL is kicking things off in style with the first Dota 2 stop for ESL One in 2017, at the Resorts World Genting in Malaysia. The first ever Malaysian ESL One event will see eight of the world’s best teams battle it out for their chance to win the $250,000 prize pool. The event will take place today at 03:40 PST / 12:40 CET and will carry right through to Saturday, while the finals start very early Sunday at 02:00 PST and later at 11:00 CET.  The full weekend schedule can be found here, while the event can be watched over on Twitch.

Overwatch’s Winter Premiere kicked off Tuesday, with eight teams vying for their share of the $100,000 prize pool. The Premiere has already been filled with a few surprises as both Cloud9 and Fnatic made the decision to drop out of the tournament despite qualifying, while the Renegades took down FaZe Clan (Fnatic’s replacement) 2-0 in the first round of the group stage. Things continue to heat up as we enter day three of the group stages and there’s plenty of action to look forward to. You can find the tournament schedule and stream here.

The last major CS:GO tournament of 2016 saw Astralis outgun OpTic at the Esports Championship Series in an explosive final at the Anaheim Arena. It was a great event and many of us will miss the frenzied firefights, but you needn’t worry as we have another CS:GO tournament to look forward to. Eight teams are heading over to Burbank, California to participate in the ESEA Season 23 Global Challenge for their chance to play in the in the Season 5 ESL Pro League. Semifinals begin Sunday 09:00 PST / 18: 40 CET, while the finals start later at 16:40 PST / 01:40 CET. Check out all the action over on Twitch.

The SMITE World Championship at Hi-Rez Expo 2017 will once again feature the top PC SMITE teams from around the world. Players will compete for their share of the $1,000,000 prize pool and will battle it out to determine who the best team is in Season 3. The event will be held at the Cobb Energy Performing Arts Centre in Atlanta, Georgia. Make sure you check the schedule times and stream over on the Hi-Rez expo site.

There’s a newcomer to the world of digital sports as the first-ever Paladins HRX Invitational started yesterday at the Hi-Rez Expo. The eight teams who qualified from regional tournaments in North America, Europe, LATAM/Brazil, Australia/New Zealand, and China will compete for their chance to win the $150,000 prize pool. Group play resumes today, with the first match beginning at 09:00 PST / 18:00 CET. The semifinals start tomorrow at 07:00 PST / 16:00 CET, while the finals begin the same time Sunday.  You can find the full schedule here and watch the livestream over on Twitch.