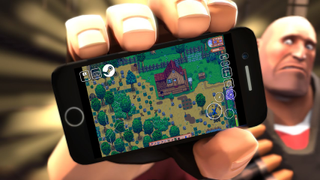 The dream of playing Steam games anywhere is mostly a reality thanks to Steam Remote Play—but there are loads of kinks you have to deal with depending on the game. A touch screen is a piss poor substitute for an actual keyboard and mouse (or controller), but yesterday's Steam Remote Play update has made playing PC games on your phone way more tolerable for over 100 of the most popular Remote Play games.

In a blog post, Valve explained that some games, like Slay The Spire, work pretty well using a touchscreen, but plenty of others are frustrating to play using the default touchscreen buttons. "So to improve the experience," Valve said, "we put together default touch configurations for over 100 of the most common and desired Remote Play games."

Now, when you play one of these 100 games on your phone, you're not stuck using one-size-fits-all layout of touchscreen buttons—many of which could be functionally useless depending on the game. Each of these 100 games (you can see the full list here), now has a custom-tailored layout.

To provide an example, Valve showed off the new layout for Stardew Valley. "In this game the X button uses your farming tools," the blog post explains. "They're used rapidly and extremely often, so we enlarged the button to make it easy to press without looking. The arrow buttons cycle through your quick-bar items, and each of the sub menus have been given a helpful icon for quick access. The top center of the screen is sometimes used for dialog, so we moved the Steam button to the upper left. We also moved the keyboard button which is used for giving everything on your farm personalized names. The rest of the screen acts as a cursor trackpad for easily organizing the inventory."

Compare that with the new layout for Session, the new early-access skateboarding game, and it's easy to see the benefit. Because Session relies on a dual analog input to do tricks, the center of the screen has two virtual analog sticks, with other necessary buttons tucked off to the side.

It's an improvement, to be sure, but if you're going to be spending any serious amount of time playing these types of games on your phone you'll still be better off getting a controller and cradle to hold your phone. Curious, I downloaded Undertale to see what it's new default layout looked like. Just as I expected, it's much cleaner and only shows the two face buttons actually needed in the game along with a virtual analog stick to control movement. But it's still far from precise—dodging enemy attacks is all but impossible. That's not really Valve's responsibility, though. Virtual joysticks just stuck. But these new layouts are promising if you're someone who likes taking Steam on the go.