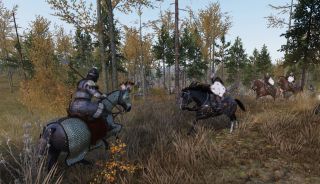 I’m determined to own a castle. A big fortress with thick walls and tireless guards willing to throw their lives away for me. Good thing, then, that Mount & Blade 2: Bannerlord’s demo plonks me in the mid-game, with loads of influence to spend on burly warriors. Finally, this humble writer is going places.

First order of business: build an army. Instead of recruiting individual troops to take with me on my grand adventure, I hire captains, each with their own wee army. Prior to being hired, these mercenaries wander around the map and do their own thing, so it takes some time for them to merge with my growing horde.

With the extra time, I search for a target. I’m in luck, as I’m already working for an empire that’s at war with another faction, and they’ve got territory nearby. I start the siege and a camp sprouts up around it, letting me build siege equipment. Unfortunately, soldiers from the fortress sneak out at night and sabotage my ballista. Nervous about another counterattack, I begin the assault.

These fights can be auto-resolved, but I’m a hands-on boss. It’s dawn, with the sun slowly coming up behind my army and the huge, imposing silhouette of the fortress ahead of us. I’ve got direct control of my character, who can ride around, stabbing and slashing with his sword and spear, but I can also command my units. I keep some of them back, so they don’t get filled with arrows, and push up the siege towers and battering ram.

The gate is quickly smashed, my troops swarm in, and by the time I’ve hopped over the remains of the battering ram, the enemy surrenders the castle. We outnumbered them a little bit. OK, a lot. The castle is now part of the empire and, after a vote, it’s given to me.

Exploring my new home, I get to know some nobles, spend far too long playing an extremely boring minigame and finally sit on my throne. Conversations give me new things to look up in Bannerlord’s encyclopedia, so I can learn about all the movers and shakers and their relationships, letting me prepare for my life as a politically savvy lord.

With political clout, a whole new world opens up. I start throwing my weight around and try to push forward new policies, shaping the empire, and find the people I need to bring over to my side if I want to rule it myself. Lamentably, my dreams are too big for the brief demo and my tenure as lord is cut short.

Bannerlord offers up a bewildering number of distractions and paths, but there’s a thrill in just jumping down the rabbit hole and seeing where it takes you. Maybe you’ll end up plotting to overthrow an empire.

It's been a long wait, but it's finally due out in March, though only in Early Access. TaleWorlds is also currently hosting a closed multiplayer beta, so there might be other opportunities to check it out before launch.