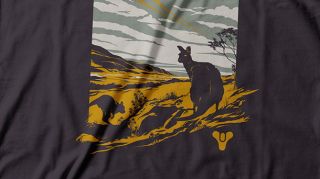 Update: And here it is! Preorders for the Destiny 2 "Guardians for Australia" T-shirt are live now in the Bungie and Bungie EU stores, and will remain available until 9 am PT on February 8. Purchasing a shirt also gets you the Star Light, Star Bright emblem, which you can see below the tee.

"The bush fires currently ravaging Australia have been devastating. Many people have lost their homes, firefighters are risking their lives daily, and an estimated hundreds of millions of wild animals have fallen victim to the fires," Bungie said. "We have created the Guardians for Australia fundraising campaign to support both Australia’s firefighting efforts and the country’s animal rescue and conservation efforts."

The shirts sell for $25/€28. Half of all profits raised will be donated to the New South Wales Rural Fire Service, and the other half will go to WIRES, Australia’s largest wildlife rescue organization.

For months, Australia has struggled to deal with devastating bushfires burning across the country. Millions of hectares have burned, an estimated one billion animals have been lost (including some endangered species, which may be driven to extinction), thousands have been forced to evacuate, and nearly 30 people have been killed so far.

In yesterday's This Week at Bungie update, the Destiny 2 studio revealed plans to raise funds to support firefighters and conservation efforts through the sale of a limited-edition t-shirt. The shirt will be available for pre-order on the Bungie Store from January 16 until the weekly reset at 9 am PT/12 pm ET on February 18. Bungie is still working on the design, but said that a "preview" will be shared early next week; anyone who purchases the shirt will also get a code for the Star Light, Star Bright emblem.

Half of the profits raised by the sale of the shirts will be donated to WIRES, the largest wildlife rescue organization in Australia, and half will go to the New South Wales Rural Fire Service, which has borne the brunt of the fires.

"Over the past two decades, the Bungie community has been an amazing force for good in our world by raising millions of dollars to assist those in distress," senior Foundation manager Christine Edwards said.

"In addition to supporting thousands of children through our iPads for Kids Program, you have helped victims of hurricanes Katrina and Harvey and have donated to those affected by earthquakes in Haiti, Japan, and Nepal. Time and time again, you have been Guardians to others in their greatest time of need."

As reported in November by MCV, the Bungie Foundation's first Game2give campaign raised more than $1.6 million to support the iPads for Kids Program and Children's Miracle Network. More information on how to support the Australian fundraiser will be revealed in next week's TWAB update.