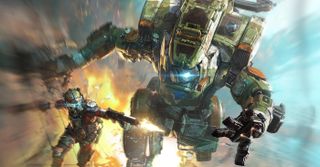 Looking for help picking the right titan for the job? Click here.

Titanfall 2 is easily one of the best games to have come out in 2016. Its brilliant singleplayer campaign and intuitive weapon and movement systems make for an extremely satisfying experience. Nothing comes close to the feeling of scrambling onto the back of an enemy titan, tossing a grenade into its empty battery slot and launching yourself to safety before the mechanised behemoth explodes.

However, picking up and playing Titanfall 2 can be a rather daunting experience, especially for new pilots. Multiplayer requires a deep understanding of the game’s movement system and combat mechanics. To get you started, however, we’ve put together a list of the best guns that you should be using to give yourself an advantage on the battlefield.

It doesn’t matter if you’re a fresh-faced recruit learning the ropes or an experienced pilot who knows their way round a titan, you should all be using the EVA-8. This shotgun is an excellent gun that can be used at all levels of play. It can instantly drop enemy pilots in close-quarters battles with just one shot, while it kills in two or three bursts at range. If you have the aim and quick reflexes to utilise its high damage output, you’ll be rewarded with a bountiful supply of kills that will have you piloting your titan in no time.

While the EVA-8 has decent range for a shotgun, its low rate of fire can make follow-up shots slow, meaning it is advised to aim for one-hit kills when possible. If you find yourself in a long range firefight, simply disengage and try to find a safe route you can flank from. If flanking is not an option combine wall-runs, double jumps, and slides to quickly close the gap between your opponents and deliver a satisfying shotgun blast to their face. Try to find buildings with the highest amounts of traffic and draw enemy pilot to your location by firing your pistol, or cull a few grunts for added points. When they run into the building they’ll be staring down the barrel of your shotgun.

Respawn has already tried nerfing this weapon, but their efforts have been fruitless. This submachine gun’s damage profile is still fantastic at most ranges, easily outclassing the likes of the carbine. The Volt has some of the best hipfire accuracy in the entire game and its impressive fire rate can shred enemy pilots to pieces, especially when amped.

Try to use the Volt at medium to close range, as the blue tracers can very easily give away your position. If you’re firing at a target that is at the other end of the map make sure you quickly change your location. This will greatly diminish the likelihood of the entire enemy team swarming toward you. There are no special tactics required for this gun, just let loose and rack up those kills.

The Hemlok BF-R is an absolute beast on the battlefield, as its highly accurate firing pattern and impressive damage make it capable of downing a pilot with just four shots. The number of shots needed to kill pilots can be reduced even further with the use of the Amped Weapons Boost, which can make the Hemlok feel unstoppable. However, against highly mobile opponents, it can be extremely difficult to land all the necessary hits due to the Hemlok’s burst fire nature.

To cover this weakness, make sure you pack a few Arc Grenades to instantly slow down any pesky pilots that may be difficult to hit. They have the second shortest ordnance cooldown in the entire game, so you’ll be able to connect your shots even when the odds stacked against you. Try to avoid aggressive run and gun play styles, as the Hemlok is completely outclassed by most pilot weapons at close range. Adopting a defensive play style and shooting from advantageous positions at both mid and long ranges is key to your success with this weapon.

The X55 Devotion has built a notorious reputation amongst pilots thanks to its ridiculous rate of fire, high damage, decent range and accurate hipfire. This light machine gun can easily mow down multiple enemies within seconds due to its unique ability, which allows players to increase its fire rate the longer they hold down the trigger. The Devotion is only counterbalanced somewhat by the fact that its starting rate of fire is incredibly slow on the first few rounds, even more so than the game's semiautomatic weapons, but this doesn’t hinder its performance at all.

Its high bullet travel speed, and damage range always ensures a 3-hit kill no matter your distance. Tap firing it one shot at a time makes the Devotion even more accurate, putting it on par with the G2A5 and diminishing most of the gun’s recoil. However, even when you spin the gun up to its maximum rate of fire the recoil is easily manageable, especially considering you only have to land three shots to kill an enemy. Make sure you stay within assault rifle range until you have your Amped Weapons Boost activated, as it will allow you to kill enemy pilots with just two shots.

The G2A5 is one of the most reliable guns in Titanfall 2, delivering consistent killing potential at all ranges. The only downside to this gun is its bad hipfire accuracy, but if you can deal with its lacklustre close combat capabilities you will be rewarded. This assault rifle can kill pilots that would usually be out of reach of most guns, making it the perfect choice for most of the game’s larger maps.

Just be aware that the G2 cannot keep up with close range guns like the Mastiff and EVA-8, so try to avoid close range combat where possible. To help counter this weakness make sure you have a decent sidearm, this will increase your survivability in close quarter engagements. The G2A5’s sole purpose is to focus on eliminating enemy pilots, as you’re small clip size can land you in a lot of trouble if you’re caught farming grunts. The sheer reliability this gun brings to the battlefield makes it an excellent choice for both new and experienced pilots.

This weapon has arguably the best damage output out of all the SMGs in the entire game. The Alternator is extremely effective at close range, but it does require a bit of finesse when it comes to killing pilots at mid to long range distances. The side-to-side recoil can be completely mitigated by burst firing when you’re not within point-blank range of a pilot, but this gun really shines when the enemy has nowhere to escape. Try holding down buildings that see high amounts of traffic, as this will ensure you’re always in range of your opponent, while also slowing down their movements. Make sure that you equip the Extra Ammo and Speedloader modifications to counter the Alternator’s small clip size, and consider dropping Anti-Titan Weapons in favour of a pistol. This will ensure that you’re completely covered when you happen to run out of ammo in a firefight.

The CAR is one of the two submachine guns developed from the R-101C Carbine platform, though unlike the R-97 it has far greater power. This SMG is only marginally beaten by the Volt, as it has lower range and worse hipfire accuracy thanks to the missing dot on the gun’s crosshair. The weapon may not have the best damage output in the world, but its impressive recoil management and rate of fire make up for its weaknesses. With 30 bullets in the magazine, you’ll have the versatility of clearing out waves of grunts and spectres, while also having enough ammo to mow down incoming pilots. The CAR is a great rushing weapon that can quickly take out enemies camping at the back of the map, so if you’re sick of seeing Devotion users hiding out in the rocky fringes of Homestead the CAR might be the gun you’re looking for.

If you’re looking to leave your titan behind and venture into the Pilots vs Pilots mode you may want to consider taking the regular Wingman, or Wingman Elite. This trusty sidearm packs a real punch and brings a lot of damage to the table. The regular Wingman kills pilots with just one shot when amped, allowing you to finish off low health enemies when you’re out of primary ammo.

The Wingman Elite on the other hand requires more precision, as it doesn’t share the same bodyshot damage that the ordinary Wingman features. However, the Elite is able to headshot pilots at long distances and its fire rate is very spammable, so if you’re used to playing games like Overwatch where you spam bullets at headshot level the Wingman Elite maybe the gun you’re looking for. There is a high skill ceiling here, but mastering this gun is deeply rewarding.