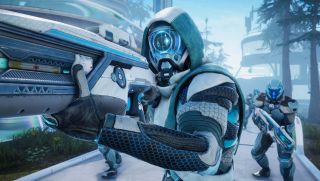 Phoenix Point's Epic Games Store exclusivity ruffled feathers but was quickly walked back when it was announced that the turn-based tactics game would also launch on the Microsoft Store and Xbox Game Pass for PC. It launched on December 3, but the Microsoft version remains MIA.

Initially the plan seems to have been to launch both versions on the same day, and that's what people were anticipating. No delays were announced before the release date, though a community manager did mention the possibility when answering a question on Reddit.

"We were planning on releasing on Game Pass on the same day," they wrote, "but we're waiting for certification from MS—so it might be a few days to a week later."

Slipped into a Reddit thread with less than 30 upvotes, most prospective players won't have seen this, but now there's an announcement on the official forums. It's been delayed because of the Microsoft certification, which has had a knock-on effect, creating yet more delays.

"The fact is we dropped the ball," the announcement reads. "We were exceedingly busy getting the game itself ready, and being inexperienced with Game Pass and the Microsoft Store, we simply had not properly prepared the groundwork to get the game released on time on these platforms. Compared to other platforms we’re on these platforms require a number of prerequisites, from Microsoft certification to legal documentation review. While these are now mostly complete, they have given rise to a number of new delays."

Apparently Snapshot Games isn't able to to make all the 'content' available in the Epic Games Store version available in the Microsoft Store version, and it won't launch the game until this is no longer the case. It's not clear what is missing or why, but the additional delays mean that there's now not even a release window.

Regardless of your stance on platform exclusivity, this doesn't seem to have been well managed at all. These deals were clearly made at the last minute and have made the simple act of buying a game online frustratingly convoluted. And while the not-quite-exclusivity gave Snapshot Games more time and resources to polish and expand the game, it still launched with its fair share of technical problems.