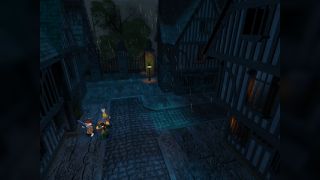 Every now and again, Silver pops into my head. So many imps murdered. 1999 was a pretty great year for RPGs, which meant Spiral House’s action-RPG had to go up against the likes of Planescape: Torment and System Shock 2, but it held its own. And now, finally, you can grab it on Steam and jump back 18 years.

Silver’s been available on GOG since 2012, but if you must have all your games in one giant Steam library, now you can add this to the pile.

Here’s how THQ Nordic describe it: “Back in 1999, Silver was the European answer to JRPGs. With eye-candy in the form of pre-rendered 2D backgrounds, manga-inspired character design, and console-style gameplay, it introduced PC gamers to a new genre.”

I honestly don’t remember it feeling much like a JRPG—it’s more of an ARPG. No turn-based combat here. Instead, you’ll use your mouse to swing your sword, simulating its movements, which is still an enjoyable novelty today.