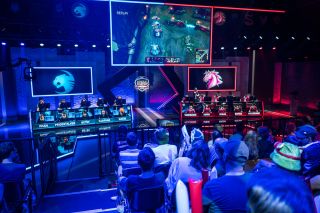 Gambit recently took home the $500,000 prize pool after beating Immortals 2-1 at the PGL Major in Poland. It’s a slightly quieter weekend in the world of digital sports, but there’s still plenty of events for you to feast your eyes on. Fans of Overwatch can look forward to the intense team fights of the Apex Season 3 finals, while the StarCraft II: Intel Extreme Masters kicks off its main event in Shanghai. We even have the Rocket League: 2017 World Cup to look forward to. All the details on this weekend’s events can be found below. Have a great weekend!

There are only two weeks left in the LCS Summer Split and both the NA and EU teams will be fighting hard to claim a seat at the playoffs. The top North American teams remain in deadlock as Counter Logic Gaming and TSM are both one win away from dethroning Immortals. These three teams are the best in the league at the moment and if they can maintain their dominance on the Rift, we could see an extremely tense semi-final match up. Meanwhile, in Europe Fnatic continues to dominate the Group A standings with eight wins and only one loss, but H2K, Splyce and Unicorns of Love are close behind them in Group B. We shall have to see whether Splyce have what it takes to land a critical blow to H2K today. Both schedules and streams for the EU and NA LCS can be found by heading over to lolesports.com.

Week four of the Gfinity Elite Series will see teams from around the world battle it for the chance to make it to the playoffs. EnVyUs Academy came out on top during the group stage and they will be aiming to maintain their performance today at 10:30 PDT / 19:30 CEST when they take on Method. Meanwhile, Epsilon and Infused will duke it out at 13:30 PDT / 22:30 CEST to see who has what it takes to rival EnvyUs Academy. The full schedule and stream can be found over on gfinityesports.com.

The Intel Extreme Masters kick off this weekend as China’s finest battle it out for their chance to win the $25,200 prize pool and the IEM title. These matches are extremely important to both veteran and rookie players looking to kickstart and maintain their StarCraft II careers, so expect plenty of drama this weekend. Group C’s matches concluded yesterday for US viewers, but those of you in Europe can catch the action today at 07:00 CEST. The quarterfinals will continue tomorrow and will be followed by the semifinals and finals on Sunday. The full weekend’s schedule and stream can be found by heading over to wcs.starcraft2.com.

Overwatch APEX Season 3 wraps up this weekend, with the conclusion of the monthly series and a $177,000 prize pool being awarded to the victor. The finals are taking place this Saturday and many fans will be eager to see whether KongDoo Panthera has what it takes to beat Lunatic-Hai. Both teams have looked extremely strong this season and the match could go either way. The previous match in the tournament saw AF.Blue obliterate Team EnVyUs to secure third place, but the long-awaited finals are just around the corner. The action will kick off at 03:00 PDT / 12:00 CEST, so be sure to check out the full stream over on Twitch.

The Hearthstone Championship Tour may have concluded, but the card slinging action doesn’t stop there as we head to Thailand where players will test their mettle to see who is top dog. Hearthstone’s Thailand Major begins its three day tournament today at Pataya Beach where 256 participants from across the world will battle it out. The Thailand Major will award points towards the Summer season of the 2017 Hearthstone Championship Tour, while also granting the victor the lion’s share of $5,000 prize pool. Make sure you head over to battle.net to see the full tournament schedule, while the English stream can be found on Twitch.

The high speed action is far from over and there’s still plenty to enjoy ahead of Rocket League’s Season 4 tournament. This weekend the world's best Rocket League players will battle it out to represent their homeland and compete for the title of World Champion. There will be a $5,000 prize pool for the top three teams who make it through the high-octane matches. The event will be streamed live from The League of Rockets Twitch channel, so make sure you head over to badpanda.gg to see the full tournament breakdown and schedule.

Defend the North returns this weekend where top players from all over the world will come together to beat the virtual snot out of one another. The tournament begins today in White Plains, New York and is one of two exciting Ranking Events taking place this weekend. Top players include PG|Punk, who took 2nd place at EVO 2017, RISE|Smug and EG|NYChrisG. The Abuget Cup 2017 is also taking place in Jakarta, Indonesia this weekend, with notable appearances from CYG BST|Snake Eyes, Daigo Umehara and ZOWIE|Oil King. Be sure to head over to capcomprotour.com to find the full schedule and stream for both tournaments.