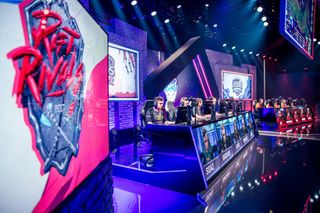 It’s been an action-packed summer so far and it’s that time of year where the eyes of the esports world turn to the Dota 2 International, which begins in August. However, there’s still plenty of action to be had from the League of Legends: Rift Rivals to the Hearthstone: Spring Championship. We even have the StarCraft II: Global League Season 3 to look forward to. All the details on this weekend’s events can be found below.

The LCS is taking a break this week as Rift Rivals continues to pit teams from all 13 regions against their closest rivals and re-open old wounds. Each tournament will vary in the number of invited teams, venues, and format—but every event will pair one region against each other. Back in 2013 Riot held its first ever Europe vs North America League of Legends competition, called Battle of the Atlantic. North America ended up winning this tournament, despite Europe coming out with a better record. Of the ten teams that competed at that tournament, only Fnatic, Cloud9 and Team SoloMid, will make their return to once again battle it out to secure regional glory and bragging rights. The full schedule and stream can be found by heading over to lolesports.com.

Dota 2’s Final Match 2017 is kicking off tomorrow in Lima Peru where the eight invited and qualified teams will be competing for a slice of the $50,000 prize pool. The tournament will feature Alliance, Team Spirit and MVP.Hot6ix as the overseas guests. Teams will be separated into two groups of four for the group stage and will compete in a one game series round robin format. The first and second place of each group will be seeded into the upper brackets of the main event, while the third and fourth place teams will go to the lower brackets. Meanwhile, the main event will take place July 8-9th, and will feature a double elimination round. Today’s group matches will see MVP.Hot6ix face SG e-sports at 09:00 PDT / 18:00 CEST, while Alliance will duke it out against Midas at 14:00 PDT / 23:00 CEST. Make sure to check out the full stream over on Twitch.

The Mars Dota 2 League is well underway and as of writing OG has topped the group with a 5-2 record, while Clutch Gamers fell to the bottom of the standings after only picking up one game. Rounding out one of the last LAN events before TI7, the eight teams will be fighting hard to show off their strengths and claim the lion’s share of the $250,000 prize pool. The winner’s final begins Saturday at 02:00 PDT / 11:00 CEST, while the grand finals start the same time tomorrow. Make sure to head BeyondTheSummit’s Twitch channel to catch all the latest action.

This year's ESL One tournament will see 16 participants duke it out for $250,000 at the Laxness Arena in Cologne, Germany. Twelve of the participants received direct invites, while the remaining four teams were admitted via regional qualifiers. Team Liquid are currently at the top of the leaderboard and their dominance has landed them a place at the quarterfinals. Meanwhile, Ninjas in pyjamas will be kicking today’s matches off at 01:00 PDT / 10:00 CEST, while the semifinals and finals start July 8-9. The full schedule and stream can be found by heading over to ESL’s official site.

The Global StarCraft League is the bedrock of competitive StarCraft II play in Korea, so expect plenty of drama this weekend. Season three of the GSL boasts a $152,100 prize pool and a guaranteed spot for the champion in the WCS Global Finals. These matches will be the defining journeys in many StarCraft II pro players’ careers and there’s certainly a lot on the line. Group B’s matches begin today at 21:00 PDT / 06:00 CEST and will continue throughout the day. The full weekend’s schedule and stream can be found by heading over to wcs.starcraft2.com.

Overwatch Apex Season three continues to heat up as we enter the final stages of the tournament. The finals are fast approaching and many fans will be eager to see whether KongDoo Panthera can take down Lunatic-Hai on July 29. Meanwhile, AF.Blue and Team EnVyUs will battle it out to see who will take third place in today’s match. The action will kick off at 03:00 PDT / 12:00 CEST, so be sure to check out the full stream over on Twitch.

The top 16 players from each region's spring playoffs will battle it out at the Silver Hall Expo Center in Shanghai, China. Players will battle in a dual tournament group stage, and the top two from each group will advance to the single-elimination playoff bracket. Only the best players will advance to the finals where they will have a chance to grab the $250,000 prize pool, so expect plenty of tense matches. The group matches concluded yesterday for US viewers, but those of you in Europe can catch all the action today at 04:30 CEST. The full schedule and stream can be found here.

Phase two of the HGC is well underway and teams from around the world will continue to battle it out for the $425,000 prize pool. Gale Force eSports still remain on top and they will be aiming to take down No Tomorrow in today’s match. However, No Tomorrow are on the rise as they have currently gone undefeated in in Phase 2. Meanwhile, Fnatic continues to lead the European bracket and Team Liquid will be hoping to take down Tricked esport to close the gap. Each team has their eyes firmly set on the next Western Clash in August, so every victory will help increase the chance of taking the title. Make sure you head over to heroesofthestorm.com to find the schedule and stream for all the matches being played this weekend.

The 7-Eleven Summer Series took place last Monday, and offered a unique glance at what we may have in store for RLCS Season 4. Eight teams were invited to compete in a single elimination tournament, but G2’s dominance saw them take the trophy. However, the action doesn’t stop there as the Rocket League Summer Series hops over the ocean to Europe, where Europe’s finest will compete for their chance to compete for a $6000 prize pool. You can catch the action on Sunday at 09:00 PDT / 18:00 CEST by heading over to Twitch.