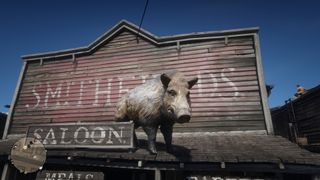 Update: Rockstar has just pushed out its 1.14 update for Red Dead Redemption 2, which is expected to fix some of the enduring performance problems for PC users. The patch notes are long and detailed, and also provide a workaround for stuttering on Nvidia cards.

"We have identified an issue with certain NVIDIA graphics card drivers that cause significant stalls of several seconds on systems with 4-core and 6-core CPUs," the statement related to stuttering reads. "While we work with NVIDIA to improve driver performance, a temporary work around can be added to the launch arguments of the game to re-balance workload on the CPU cores and avoid the conditions that cause this issue."

The PC release of Red Dead Redemption 2 has been a rough ride so far, as players have struggled with freezing, crashes, and generally poor overall performance. Some progress has been made in addressing those issues, but problems persist, one of the most common being an ongoing issue with stuttering.

Players have managed to figure out a workaround, and it's relatively simple but kludgy, and of no use for people who don't pay attention to gaming sites or Reddit. An update that's expected to come out later today will hopefully help smooth things out for everyone, but Rockstar cautioned that it might not resolve the problem entirely.

"We are aware that a small number of Red Dead Redemption 2 PC players are still experiencing some ongoing problems with the game stuttering. We believe this is due to unforeseen issues related to specific combinations of Nvidia graphics drivers, Nvidia GPU cards and certain CPUs," Rockstar said.

"We will be rolling out an update to the game today which will address the stuttering issue alongside a host of other fixes. However, we are still currently working together with Nvidia to completely resolve the stuttering issue in a future update, and it may take us up to a few days to properly test everything and ensure the next update completely solves the problem."

As a sorry-and-thanks to PC players for the hassles, anyone who plays RDR2 "this week and through to the holiday season" will be given a Red Dead Online bonus bundle that will include the Prieto Poncho, provisions, and ammo. Details on that will be announced later. Rockstar also urged players having troubles with RDR2 to hit up the troubleshooting page on its support site.

We'll be taking another look at RDR2 performance on PC later today, and will keep you posted on what we find.