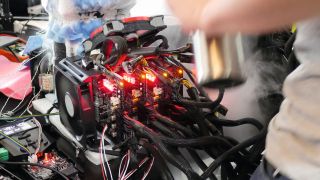 Frames per second are an afterthought for Goddy ‘Vivi’ Roodt, South Africa’s champion overclocker who placed second in June’s G.SKILL OC World Cup and once coaxed 6.7 GHz from an i7 4770K—almost twice its base clock speed. He is one of a breed of elite overclockers who scour component lines for perfect specimens and cool them using dry ice or liquid nitrogen for an edge on competitive benchmarking leaderboards.

To me, a man mistrustful of the howl my graphics card gives out on going up a few megahertz, paying way over the odds and stockpiling liquid nitrogen like a B-movie scientist seems a lot of work for smoother edges and fancier shadows. Each year, however, industry sponsors stump up cash and components for international challengers to push to their breaking points in extreme overclocking contests: the Intel OC Challenge, MSI Master Overclocking Arena, and the HyperX OC Takeover are among the most prestigious. Roodt, with the air of a man who’s had to justify his expenses to more than one baffl ed friend, makes clear the gulf between overclocking for games and for glory.

“After two hours you stop, because your entire system freezes over and it becomes too wet. You have to insulate your motherboard with electrical tape and vaseline and whatever you can find, so it gets really ugly, but the practical use… there’s no practical use for overclocking! It’s like Formula One racing where you’re not going to race your car to the shopping centre.”

Attaining a rank alongside overclockers with identical rigs on aggregator sites such as HWBOT sparks compulsion, prompting those with the bug to push their processors ever harder until they hit the ambient cooling wall and dunking the radiator in a bucket of ice water becomes the logical next step.

Bubbling nitrogen and prize pots are reserved for the avant garde of the overclocking world, of course—Amazon don’t do LN2 by the litre. The elite overclockers (defined by HWBOT as those having direct industry support) rely on long experience, well-placed contacts and decent luck to be competitive. Roodt’s break came when his long-term mentor, Seth, selected him as his teammate in 2008’s MSI Overclocking Arena.

“It starts with lots of crying because you break a lot of your own stuff. It’s tough to just start off extreme; you have to start slowly and build your way up. Right now, I have to buy my own liquid nitrogen, but since I’ve been at a few competitions and I’ve become fairly known, I get almost the full spectrum from vendors if I promote the brand. But when we have a competition, no amount of sponsoring can save you! If you want to be on top, it will always be expensive.”

It’s a state of affairs that concerns HWBOT’s managing director Pieter-Jan Plaisier, who describes the site as the binding glue for all the overclocking communities around the world. It is at once a database for benchmark scores, a competition engine for managing tournaments, and an international, third-party moderator of results. Since 2006, when Plaisier reported so many inaccuracies at HWBOT.org that he was brought on full-time, overclocking has undergone some dramatic shifts in its profile.

“When we started,” Plaisier tells me, “for a lot of the industry players, overclocking was something very niche, and something they were very uncomfortable with, because we essentially had these people around the world who took their hardware, pushed it to the limit, and very often also broke the hardware.”

The manufacturers’ response was twofold: to make the hardware more robust and to spin or suppress the discovery of new chips’ limitations by getting overclockers on-side. Intel’s new Skylake processors, having no lower heat limit and thus allowing liquid nitrogen to be used to its full capacity, are an elite overclocker’s dream. But now that hardware giants have seen the PR benefit in appeasing hobbyists, the sport risks becoming sterile. “The people who are not working for a vendor have less of an outlet to practise their hobby. World record chasing is not a fair competition—it requires an amount of money that regular people cannot afford.”

HWBOT serves a far broader community and they aim to invigorate extreme overclocking. After the elite and extreme brackets, they split competitors into enthusiasts, novices and rookies based on the time they’ve been site members. This year HWBOT launched the World Tour: a series of non-exclusive gatherings free of marketing spiel. Roodt encourages anyone with a spare afternoon and a sturdy PC to try their hand. “You shouldn’t be scared to overclock. Try one benchmark, run it once, get a score, and go experiment in the BIOS with upping your CPU frequency one click. Look at your score again, and you’ll get excited by the increase. It snowballs.”