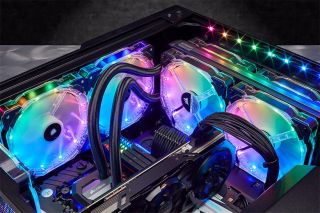 1. Use an SSD
SSDs use a fraction of the power of a traditional HDD, and they bring better performance. Best SSD for gaming.

2.Get a smart mobo
Some motherboards, like MSI's ECO line, allow you to disable unused features to save power. Best gaming motherboards.

3. Spend more on a PSU
Spend a little more on a power supply unit and you can reach up to 90% efficiency. Best CPU for gaming.

4. Try fewer fans
Fans eat up power and generate noise—use as few of them as you can get away with. Best PC fans.

It’s funny how gamers will jump through all sorts of hoops to save a fictional planet if they’re asked to by a quest-giving NPC, but rarely think about doing the same when it comes to the real thing. The energy-guzzling PC sitting on, or below, your desk may not compare to a coal-fired power plant when it comes to environmental impact, but a 2015 study found that a typical gaming computer uses about the same amount of energy as three refrigerators (or ten Xbox consoles). So here’s a quest for you—how can you make your PC more environmentally-friendly, and quieter and cheaper to run in the process?

Let’s outline the problem first. It probably hasn’t escaped your attention that the planet is getting warmer and humans are responsible. The Earth can regulate its temperature over long time spans, but our fondness for digging up and burning coal, oil and gas is tipping the scales. The greenhouse gases that are released in the process act as a blanket that intercepts heat as it’s being vented out into space and redirects it back to the surface. If your computer was powered by renewable energy, this wouldn’t be such a problem. But more than half of the UK’s electricity in 2016 came from burning fossil fuels.

The study mentioned above found that gaming PCs only account for about 2.5% of PCs worldwide, but they account for about 20% of global computer energy use. Those numbers have probably changed since then with the rise of cryptocurrency mining, but the truth remains that gamers—while relatively few in number compared to other PC users—bear an outsized share of energy usage.

Climate change is not the only problem. The components that your computer was built from contain materials that were once buried below the ground. Mining these substances invariably means destroying the habitat around the mine, and polluting a much wider area. Huge chunks of the proceeds of mining often go to the coffers of corrupt governments, which use it to wage war. And the raw materials and finished components are transported around the world by cargo ships, which use some of the dirtiest fuels in the world.

If none of that convinced you that this is something you should care about, then here’s the kicker—energy and exotic materials are expensive! Making your PC greener also means making it cheaper and quieter. Building a PC explicitly designed to use less resources may cost a little more in the short term, but the long-term savings on your electricity bills will be worth it.

So, how do we get started? Let’s begin with software¸first, dig into your power management settings. This lets you automatically shut off your display and/or allow your computer to go to sleep when you’re not using it. Pick settings you feel comfortable with, and remember that these things only kick in when you step away from the screen—so be aggressive. You can always tone it down later.

Next up, visit your GPU settings. Adjust them for maximum efficiency (which often also means smoother framerates). If you’re an AMD user, you might have access to Radeon Chill, which keeps an eye on your in-game movements, and adjusts your framerate so that it’s high when you need it and low when you don’t. V-Sync is another good one to switch on if you haven’t already—it’ll stop your GPU producing frames your monitor can’t physically display. You might also want to pick a target frame rate for the GPU. This lets you cap your FPS, so you’re not displaying a menu screen at 2000fps. The goal of all of these kinds of features is to maintain performance while reducing power usage, so they’re basically a win-win situation. Lower power usage means fans don’t need to run so hard, so your machine will be quieter too.

If you’re building a new machine then there are a few more things to keep in mind. Normally a PC build means trading off two things: price and performance. But adding power efficiency to that list brings benefits in both of those categories. You’ll spend less in the long term, and get more bang for your buck at the same time. When shopping for components, this means checking the ratio of power use between active and idle modes. This can vary wildly between seemingly similar parts, and you want it high—which means the component isn’t sucking power when you’re not using it. These specs aren’t always available, so don’t be afraid to contact the maker or look up third-party measurements.

Pick the right power supply for your build—not too small, obviously, but also not too big. Power supply calculators are easy to find online, where you pick the make and model of each of your components and it’ll tell you what you need. Some of them even let you manually set clock speeds, for if you’re planning to overclock your system. Once it spits out a recommended PSU wattage, round the value up to the nearest 50W and you’re good to go.

You should also consider second-hand parts. Not only are they good value, they come with a huge environmental benefit over a new component. Why? Because the resources and energy that went into their creation are still being used and not being sent to landfill. If you’re thinking about the whole lifecycle of a component, it makes environmental sense to prolong its lifespan as long as possible.

Sometimes the world’s environmental problems can seem overwhelming, and it might feel like setting your screen to auto turn off won’t make any tangible difference. But just thinking about the problem has a real impact – putting it in the forefront of your brain means you’ll start making better environmental decisions in all parts of your life. Worst case scenario? You’ll have a lean, mean, quiet and efficient machine to distract you when the apocalypse comes.