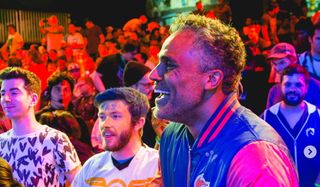 Echo Fox founder Rick Fox has spoken out about the dispute between him and shareholder Amit Raizada, which came to light earlier this year when Raizada was accused of, and admitted to, using a racist slur in an email sent to former Echo Fox CEO Jace Hall. In an hour-long interview with Richard Lewis (embedded below), founder Fox said shareholder Amit Raizada "put a gun to the company's head" by personally acquiring the debt it owed and then demanding it be paid immediately.

Raizada has subsequently rebutted every claim made by Fox, saying that he was "falsely" called a racist, and that Fox himself was in on every deal.

Fox explained that while he's the "face" of Echo Fox, he wasn't actually in a operational position at the company until he acquired controlling interest from Raizada about eight months ago, which led him to discover that Echo Fox was actually in "a very distressed situation" financially.

The organization struggled but managed to stay afloat and even remained competitive, despite having "probably the lowest payroll" in the LCS. But trouble arrived when the first payment to Raizada was made.

"We expected the debt to be pushed out until the end of 2019," Fox said. "What we discovered that he did was, knowing that this debt was on the books to the company, he went behind [our backs] and acquired the debt, and instead of pushing it out, immediately put a gun to the company's head and threatened to call the debt—hence sending the company into a tailspin."

Raizada then "presents himself as a solution" by offering to convert the debt to senior preferred debt instead of calling it in immediately, Fox said, ensuring that his obligations would be covered before anyone else—and, apparently, at twice the rate of the initial debt. Echo Fox management agreed, but then "a short few weeks later," the dispute between Raizada and Jace Hall took place.

Efforts to meet Riot's demand to remove Raizada were hampered by the preferred debt situation: "That always created conflict, especially when you had investors wondering why would they want to pay an antisemitic, racist, self-dealing, fraudulent individual," Fox said. "Why would they line his pockets with their money?"

Proposals have been made despite that, however, and Fox spoke at length about the process of selling either Echo Fox's LCS slot or the company as a whole—both options have been on the table. He also expressed very obvious frustration at the fact that despite the large sums of money involved, many current investors could end up losing out because of structural changes made by Raizada prior to relinquishing control.

"He's supposed to extend the contract, doesn't do it, and then at that point he engineers a fire sale, tries to engineer a fire sale through his behavior because he knew that if things got to a point where even if the slot was taken, he would be the first one at the top of the totem pole to get all the money. He damaged the company along the way, he eroded the value, he prevented a raise [of cash] by his behavior, he prevented a raise by the structure that he created through the fraud he created, and he breached the contract," Fox said. "All of this mess and confusion that we're in is at the hands of this individual."

Raizada responded to Fox's allegations In a statement sent to Kotaku, in which he denied being a bully and said that all Echo Fox partners were offered the opportunity to convert their debt or purchase senior preferred equity in the company—and that Fox himself approved the process. He described himself as a "passive investor" in the company, and said that Riot declared a default on Echo Fox's LCS contract in part because of "multiple financial breaches that occurred while Rick was running the company."

"The company was failing under Rick’s leadership after he removed Stratton Sclavos who built the company and created most if not all the value. Rick made several pleas to all investors for money to make payroll or pay players and teams. Rick not only approved the debt conversion and the waterfall changes about which he complains, but he sent multiple letters to the investors explaining that the transaction was good for the company, gave me an indemnity and full release of all claims. Rick and every investor in the company signed the amended partnership agreement that contained the waterfall change," Raizada wrote.

"I am not the only investor who converted debt or purchased senior preferred equity in the company—all partners were asked to participate. Those transactions single handedly allowed the company to continue operating through today, as Rick had no other funding sources. I was rewarded by Rick falsely calling me a racist, blaming me and the other investors for his actions that essentially bankrupted the company, and accusing me of fraud in connection with covenants agreed to and signed by Rick and all the partners. The only person who is not a victim and is crying wolf is Rick Fox."

A final agreement to sell the LCS slot or Echo Fox in its entirely still hasn't been reached, but Fox said that legal action against Raizada is being considered by multiple shareholders, including Fox himself.